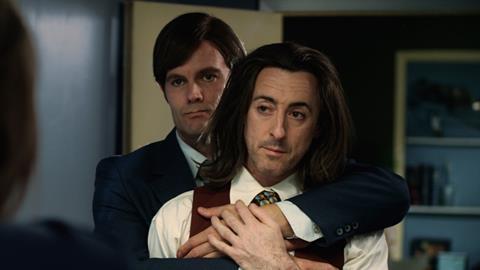 Dillahunt has chilling realistic moments that make you feel the actual discrimination in the air.

Action shifts to downtown LA. When Rudy’s noisy junkie/prostitute neighbor is arrested, her son with Down Syndrome, Marco, is left alone. Rudy protects him, and calls for help to Paul, who takes them in and pretends that Rudy’s his cousin. When Paul resists flirting with the sexiest secretary in the office and Rudy seems like a boyfriend, Paul is fired. The drama shifts to the courtroom, where the two men fight to keep Marco, and learn how rigid official homophobia is in 1970s California.

Cumming’s Rudy slashes through the teary tale, inspired by a real-life case, with an uncontrollable filthy mouth that cuts through some of the preachiness in the script co-written by Travis Fine, an airline pilot directing his second feature with Any Day Now.

As Cumming’s strait-laced closeted lawyer partner Paul (who’s outed when he’s fired), Garret Dillahunt is a square-jawed square, with all the unease that a gay man trapped in an official job probably felt back then.  Cumming’s queen character can tend toward the iconic and generic as the audience laughs with him, yet Dillahunt has chilling realistic moments that make you feel the actual discrimination in the air.

The chubby teenager Marco, who lurches between indifferent state custody and two loving protectors, is played with a shy innocence by Isaac Leyva, whose crowd-melting softness argues eloquently against institutionalizing such a person. Chris Mulkey brings a predatory coarseness to the role of LA’s district attorney.

Films on the gaping cracks in LA justice are many - the subject is vast – yet Any Day Now opens a new one. If the prosecutors are the aggressors, the judges are cowards, citing the couple’s suitability for guardianship (in predictably dutiful manner) while denying them custody rights which even then would have been within the law.

Shot mostly in interiors, Any Day Now gets the bad haircuts and the three-piece suits of time just right, along with some of the furniture. Minimally furnished courtrooms and the absence of the outdoor LA beauty shots that distinguished Tom Ford’s A Single Man (a period LA gay story with a more refined aesthetic) attest to what must have been the film’s skeleton budget.