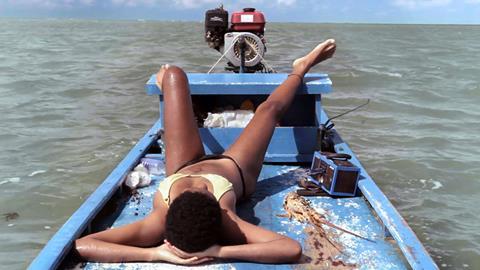 An engagingly episodic and strikingly beautiful drama, Gabriel Mascaro’s August Winds (Ventos de Agosto) is a slight but rather bewitching film that dwells on life and death, all set against the stunning backdrop of a Brazilian coastal town in the month of August, just as tropical storms are poised to batter the coastline.

It is also a film with a sense of humour, with Mascaro smartly balancing his musing on climate and the power of wind and sea with some genuinely amusing moments.

Playing more as a series of strikingly constructed vignettes (shot with lingering slow takes) rather than a linear story, the film offers a series of artistically structured snapshots which combine to offer an often amusing series of glimpses into this idyllic (though poor) village community. The sea and the land are interlinked as the elements come into play and have a gently profound impact on the people there.The film premiered at the Locarno Film Festival.

The visual arts background of director Mascaro is evident throughout the film, and is signaled in the opening scenes as Shirley (the excellent Dandra De Morais) and her lover Jeison (Geova Manoel Dos Santos) take a battered boat to the sea where he free dives for lobster and octopus while she lounges on the tiny craft listening to rock music, and (who knew anyone did this, does it help tanning?) opening a can of Coke and pouring it over her body.

She looks after her infirm and elderly grandmother and also works driving a tractor at the local coconut plantation (there are striking shots of workers climbing massive palm trees and hacking down the coconuts), though she really wants to a tattoo artist – there is a wonderful scene of her practicing on a small and rather annoyed pig – though Jeison won’t let her tattoo him.

The film essentially details a series of moments over the coming days…A genial meteorologist records the sound of the trade winds at various spots around the village; Jeison discovers the skull with gold teeth while diving and they ask around the village who it may have been; Shirley and Jeison discover a body floating in the ocean, bring it back and try and get the police to pick it up (they don’t, so he drives it to the police station and has to leave it outside when he finds the building closed), and they try and build a barrier on the beach to prevent waves from washing away a series of graves on the edge of the shore.

The simple nature of life and death, youth and age (as Shirley’s grandmother gently says:” Life is beautiful when you are young, but it is cruel when you are old”) and the sea and the land are gently contemplated in the film, juxtaposed with a series of artfully constructed images (Shirley and Jeison, naked and intertwined in the wagon carrying the coconuts). But it is also a film with a sense of humour, with Mascaro smartly balancing his musing on climate and the power of wind and sea with some genuinely amusing moments. The fact that playing over the credits he has a rocked-up version of Bali Hai (the idyllic island in film/musical South Pacific) speaks volumes about a paradise being impacted on by outside elements.