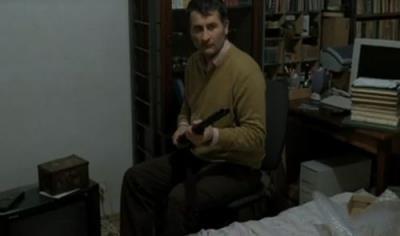 Long, slow and impenetrable where The Death of Mr Lazarescu was long, slow and life-affirming, Romanian director Cristi Puiu’s second installment of his ongoing Six Stories from the Outskirts of Bucharest project follows an unemployed metallurgic engineer on the day he goes on a killing spree.

Despite moments of tension and glimmers of the comedy-tinged real-time naturalism that made Mr Lazarescu so revelatory, it’s a long hard slog, and in the end we feel a little resentful of a film puts the audience through the mill of tedium in order to hammer home a message about the ordinariness of killing, and killers.

The five years that have passed since Mr Lazarescu have built up a weight of anticipation for Aurora among hardcore cineastes, which will translate into a limited arthouse run in more resilient territories and some small auxiliary action.

After auditioning around fifty actors, Puiu was persuaded to play the main role of Viorel himself - and in this his instinct is sound. Viorel’s lack of readability is what makes the film both fascinating (in small bursts) and frustrating.

He wakes up with a woman who is probably a lover; he also has an ex-wife, but at the end of the film we’re still not sure if we’ve actually seen her. He goes into a factory and bad-temperedly calls in a loan from a colleague: another older colleague hands over some firing pins that Viorel needs for a shotgun. By the time he starts assembling a shotgun, almost an hour in, we’ve guessed that all is not right with Viorel and something is going to go down.

A stilted man with something a little robotic about his movements, Viorel says little, in a soft voice that brims over with pent-up anger and resentment. He’s like Travis Bickle on Valium. And this in the end is what blocks the film.

The work we’re made to do would be repaid if we could be sure that this killer was an ordinary guy who’s been pushed to the edge. But it gradually becomes clear that he’s unhinged, that something has come loose inside. Mr Lazarescu was a compassionate Dantean journey with the indifferent city as its backdrop; in Aurora, hope and pity even in the midst of degradation are replaced by unremitting despair and bleakness.