Mad Max: Fury Road close behind with 10; The Martian rockets to seven. 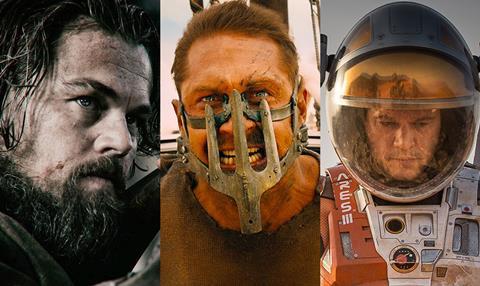 The nominations for the 88th Academy Awards have been announced in Los Angeles and Fox/New Regency’s survival epic The Revenant has clawed its way to the top with 12 nods.

Warner Bros/Village Roadshow’s action reboot Mad Max: Fury Road followed close behind with 10 nominations while in a great day for Fox the studio’s adventure The Martian notched up seven.

Open Road’s Spotlight, Carol from The Weinstein Company and DreamWorks’ Bridge Of Spies (Buena Vista distributed in North America and Fox the rest of the world) earned six apiece, while Paramount/Regency Enterprises’ The Big Short and Disney/Lucasfilm’s Star Wars: The Force Awakens collected five each.

Both Room, which was released via A24 in North America and sold internationally by FilmNation, and Working Title/Focus Features’ The Danish Girl earned four each while Fox Searchlight’s Brooklyn, The Weinstein Company’s The Hateful Eight and Lionsgate’s Sicario scored three.

The eight Best Picture contenders include The Revenant, Mad Max: Fury Road, The Martian, Spotlight and The Big Short, which have all made a strong show in awards season in the past few week. Room, Bridge Of Spies and Brooklyn round out the list.

Alejandro G Ińárritu won the directing Oscar last year for Birdman and is in contention again for The Revenant but will not go head-to-head with his fellow DGA nominee Ridley Scott, who was left out for The Martian.

Academy voters chose to include Lenny Abrahamson for Room and Adam McKay for The Big Short and - as expected - the list includes George Miller for Mad Max: Fury Road and Tom McCarthy for Spotlight.

Room and Brooklyn helped generate eight nominations for Irish film while the likes of Room and Sicario contained Canadian elements that contributed to 21 nominations. Film4 reported a successful day and was behind Room, Amy, Ex Machina, 45 Years, Carol and Youth.

Leonardo DiCaprio must be regarded as the lead actor frontrunner for The Revenant and goes up against fellow Golden Globe winner Matt Damon for The Martian, Bryan Cranston for Trumbo, Michael Fassbender for Steve Jobs and The Danish Girl’s Eddie Redmayne, who won the Oscar last year for The Theory Of Everything.

In the lead actress category Cate Blanchett is in the mix for Carol alongside the favourite and Golden Globe dramatic actress winner Brie Larson for Room, Golden Globe musical or comedy actress winner winner Jennifer Lawrence for Joy, Charlotte Rampling for 45 Years and Saoirse Ronan for Brooklyn.

Christian Bale from The Big Short is in the running in a strong best supporting actor race that is hard to call. Tom Hardy makes the cut for The Revenant, as do Mark Ruffalo for Spotlight, Mark Rylance for Bridge Of Spies and Sylvester Stallone for Creed, who will be much fancied after his Golden Globe win last weekend.

Jennifer Jason Leigh is in contention in the supporting actress category for The Hateful Eight alongside Rooney Mara for Carol, Rachel McAdams for Spotlight, Alicia Vikander for The Danish Girl and Golden Globes winner Kate Winslet for Steve Jobs.

Emmanuel Lubezki will be seeking to make it three cinematography Oscars in a row with his nomination for The Revenant. He goes against Ed Lachman for Carol, Robert Richardson for The Hateful Eight, John Seale for Mad Max: Fury Road and Roger Deakins, who picks up his 12th nomination for Sicario and is yet to win the prize.

Hungary’s Son Of Saul earned a foreign language nomination alongside Colombia’s Embrace Of The Serpent, France’s Mustang, Theeb from Jordan and A War from Denmark.

Amy is among a strong list of documentary nominees that includes Cartel Land, Wednesday’s Cinema Eye Honors winner The Look Of Silence and the Netflix duo What Happened, Miss Simone? and Winter On Fire.

The animation category features Anomalisa, Boy And The World, Inside Out, Shaun The Sheep Movie and When Marnie Was There. Minions, The Peanuts Movie and The Good Dinosaur were all shut out.

In the adapted screenplay category the contenders are Charles Randolph and Adam McKay for The Big Short, Nick Hornby for Brooklyn, Phyllis Nagy for Carol, Drew Goddard for The Martian and Emma Donoghue for her own novel, Room. Aaron Sorkin missed out for Steve Jobs.

Two old masters are in contention for their scores: Ennio Morricone for The Hateful Eight and John Williams for Star Wars: The Force Awakens.

The 88th annual Academy Awards will be held in Los Angeles on February 28.