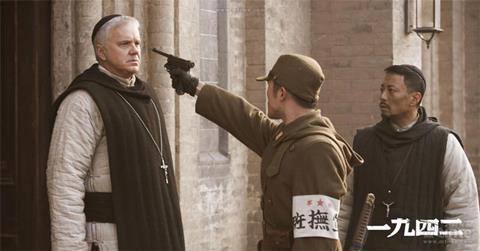 One of the two Far East surprise films on display at the Rome Film Festival, Feng Xiaogang’s sprawling $35 million production, the most elaborate, richly endowed effort of the Chinese film industry this year, is likely to mark up another success in the director’s long list of national hits.

The production spares no effort in reconstructing the ravages of the 1942 Henan famine which claimed the lives of more than three million people, spelling in great detail all the atrocities endured by the victims of the three year drought, which combined with locusts, earthquakes and epidemics to plague the province.

At the same time, Liu Zhengyun’s script, based on his own essay Remembering 1942, beyond evoking the terrible events also underlines the responsibility of the corrupt Chiang Kai-Shek’s regime, which, instead of doing something about it, was busy debating how to keep the tragedy out of the world’s eyes while exploiting it to its advantage in the war against Japan and in its struggle to grab a place among the nations deciding the future of the world after WW2.

An imposing, technically sophisticated achievement, Back To 1942 (Yi Jiu Si Er) covers a lot of ground and deals with a large cast of characters, but somehow, as if to confirm the old saying that one man dying is a tragedy but a million deaths is a statistic figure, it is rather the size of his film and the dexterity that went into its making which will affect Western audiences more than its contents.

Feng, whose past record includes such Chinese blockbusters as Assembly and Aftershock, selects a series of representative characters to follow on the harrowing 105 day march from Henan to Shaanxi in the west. First there is a rich landlord, Fan (Zhang Guoli) who will be forced to join the convoy of destitute refugees going westward, and his loyal servant Shuang Zhu (Zhang Mo) who follows him almost to the end of the journey. Fam will lose not only his properties but also his son, then his daughter-in-law, his wife and his newborn grandson, before having to sell his beloved younger daughter, Xingxing (Fiona Wang) in order to survive another day. Shuang will share all of his master’s miseries and marry - for one day only - a widow who he must sell out the next morning in exchange for the food that will keep her children alive.

And there’s more. Time Magazine reporter Theodore White (Adrien Brody) who breaks the famine story in the west to the great embarrassment of the Kuomintang regime; Father Sim (Zhang Hanyu) who loses his faith in a God that allows such miseries to take place, and Catholic priest Thomas Megan (Tim Robbins) who helplessly looks for a satisfactory answer. The discussion between these two is not unrelated to topics associated with the Holocaust in Europe.

And finally, among the rulers, there is province governor Li Peiji (Li Xuejian) whose half-hearted attempts to bring some relief to the suffering are sardonically thwarted and Chiang Kai-Shek himself (Chen Daoming), the all-powerful Generalissimo manipulating through wars and natural disasters with only one goal in mind, preserving his own power and reputation at whatever cost, even if it means sacrificing a whole starving province to the Japanese armies so that the responsibility rest on their shoulders.

Labels are inevitable in these conditions. The masses of tattered, emaciated peasants are obviously the heroes, the ruling class sampling delicacies while millions are wasting away around them are the villains and the Japanese are the soulless murderers.

Splendid camera work and richly imaginative production design offer a breathtaking study in grey – the entire picture takes place in winter with the sun entirely banished from it – with flashes of red fire and black smoke adding to the terrifying images. Though both American actors look rather uncomfortable in their roles, the Chinese cast is mostly up to the challenge, with Chen Daoming’s Choang Kai-Shek a particularly blood-curling performance as the man to fear and hate. A saga that will, no doubt, be cherished at home but most likely be filed abroad as yet another lesson in modern Chinese history. Finally, for the film publicists’ records, this was not the most tragic famine China has experienced - that one took place later, between 1958 and 1962, when at least 15 million (to quote official numbers) lost their lives.