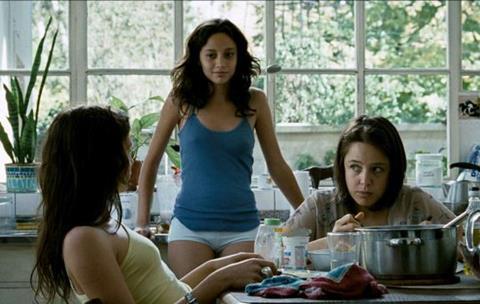 Rites of passage, memories of loss and many other moody moments fill up the debut picture of Argentinian-born Milagros Mumenthaler, who grew up in Switzerland and went back to Latin America for her first film.

To their credit, neither Mumenthaler’s direction nor the performances of her three young actresses try to flatter the protagonists.

Focusing on three sisters living together in a Buenos Aires house they inherited and trying to adapt to life without adult authority, Munethaler’s script deploys all its efforts on the emotional level but refuses to unveil many of its basic narrative details, as if wary of committing herself one way or another. Better leave the final decisions to the eye of the beholder.

Festivals tend to appreciate this kind of approach, but general audiences usually demand to know a bit more about the characters they watch on the screen. Back to Stay - which had the on-screen title of Open Doors And Windows (Abrir puertas y ventanas) - screened in competition in Locarno.

Marina (Maria Canale), Sofia (Martina Jucandella) and Violeta (Ailin Salas) live together in the house they were left by their recently deceased grandmother, apparently a highly respected teacher and an authoritative figure at home. Practically the entire film takes place in that house, the one whose doors and opens are thrown wide open, as promised by the title, before the end of the picture.

The three girls, all of them in their early twenties it seems (age is one of the many things never mentioned in the course of the film), have different temperaments, reflected not only in their conduct but also in their aspect. Marina is dowdier and homely, Sofia is flighty and spoiled, Violeta is indolent and bored.

They obviously have no money problems, though Marina is meticulously managing the house expenses while Sofia is extravagantly spendthrift, addicted to sexy outfits and always going out with friends no one actually sees. The only apparent physical male presence in their life is their tenant, Francisco (Julio Tello) who rents part of the house.

Clearly a portrait of transition from adolescence to maturity, Mumenthaler’s insistence for discretion is sometimes hard to take. Though Martin Frias’s fluid camera established a kind of intimacy with the three sisters and records their every move inside the house, it never dares or wishes to pry beyond the external appearances, so much so that by the end of the film even the topography of that house remains unclear.

Details of the past are never revealed, they seem to have no outside relations to speak of, and when Violeta suddenly runs off with a man whose identity remains unclear till the end, it comes as an entire surprise not only for the audience but for her sisters as well. Whether this kind of secrecy is part of the Argentine family ethos, whether it has something to do with the country’s political past - Mumenthaler suggests that might be one of the reasons for the absence of the girls’ parents – it is up to the viewers to decide. Bu to do it, they will have first to adapt to this existential hiatus between one stage of life to another and to accept the frictions and bickering between the three sisters as part of their attempts to establish their own distinct identity, independent of the others.

To their credit, neither Mumenthaler’s direction nor the performances of her three young actresses try to flatter the protagonists. Maria Canale’s Marina seems too motherly before she dares to spread her wings; Martina Jucandella’s exasperatingly antagonistic Sofia softens only towards the end, while Ailin Salas’ Violeta apparent slothfulness takes on another meaning only after she leaves home.

It’s a close-up look at their relationship with no real background to support it, three sisters (the magical number?) and that’s all. They live together, fight and scrimmage with each other as real sisters would do but the blood bond is almost but never entirely severed, after all.