Jimmy’s Hall premiered in competition at Cannes and opens in limited release via Sony Pictures Classics on July 3 in Los Angeles and New York with San Francisco, Chicago and Washington, D.C. to follow. 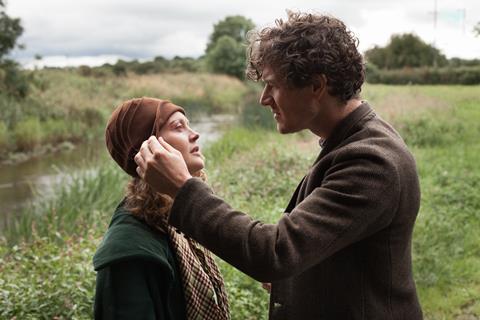 In director Ken Loach’s drama Barry Ward plays a real-life Jimmy Gralton, a former low-level activist who returns to his home in rural Ireland in the 1930’s after a decade in the States to find his first love Oonagh (Simone Kirby) married.

When Gralton decides to revive the abandoned dance hall that led to his deportation, he comes under the attention of local political and religious leaders.

Elbert Wyche talks to Ward and Kirby about working under the unique style of Loach, the Cannes world premiere and the current social relevance of the film. Wild Bunch handles international sales.

You’ve stated that you didn’t know much about the subject of the film, Jimmy Gralton, before taking on the role. How did you prepare?
Barry Ward: We spent a lot of time before shooting in that area of Ireland trying to immerse ourselves in that world. We had a really brilliant Irish historian and lecturer who gave us a series of classes about the politics of the time. We were just trying to inform ourselves as much as possible about what life must have been like.

Simone, how did you prepare to play Oonagh?
Simone Kirby: My character isn’t based on a real-life person. I just approached it the way that I normally do. I find out as much as I can about the background of the character and make decisions after talking to the writer and director. Because we didn’t have the script, we had to have a really strong backstory so that we would know our characters’ history.

At what stage did you not have the script?
SK: We never had it.

BW: You receive tomorrow’s scenes at the end of each working day so you have just enough time to learn the few lines.

SK: And sometimes you don’t receive anything. You just arrive on the day and they tell you what’s happening when you arrive.

Was there a lot of improvisation?
BW: There was quite a bit and it was encouraged. Yet, ultimately in the edit they stick pretty close to the script as it was. To enable us to get to the points in the script that they needed we were allowed to improvise. Each take was very long and felt very real and authentic, and in real time.

Have either of you worked in this manner before?
SK: No. We’ve both done a lot of theatre so it’s not too far off. The fact that we’ve got a rehearsal period of time and that we worked very closely with the other actors on set [helped]. There were no trailers on set or anything like that. We all had lunch and dinner together every day. We built up a strong bond with the rest of our cast, which is more typical of theatre than of film. All the improvisations and the backstory we got to do were really more like theatre.

Would you say that this style of working is something that you both enjoyed or do you hope to never see it again?

BW: I found it very liberating. Not for a second was it daunting because having been a fan of Loach and Laverty’s [Paul, screenwriter] work, I assumed I was in safe hands. They always get good performances from people. So it sounded like a tried and tested method and I was willing to go along with it.

SK: I agree. Shooting in sequence is such a gift for us and Ken goes out of his way to make it as real for the actor as possible, so that there’s nothing in your way. If there are a lot of things in your way it can make it hard to put yourself in the scenario.

What was it like having the world premiere in Cannes?
SK: To go over there with a Ken Loach film was exciting. People were very excited to see his new film. On the night the theatre was packed and people responded really well. There was a big standing ovation at the end. The audience in Cannes can be quite hard. They’re not afraid to boo if they don’t like the film.

BW: It’s a lot of hard work. It’s full-on day-long junkets and press. You don’t get to see any films other than your own. Certainly to be there with a Ken Loach movie is as good as it gets, I think. It was kind of all-new to both of us. We were both green and fresh.

The film is set in the 1930’s but still feels relevant to current events. Did you feel that while shooting?
BW: Very much so. The parallels between what Jimmy and his colleagues went through and how the church was oppressing them – there seems to be a similar erosion of civil rights here [in the US]. It needs the action of the people to change that.

SK: It’s never a good thing when people have too much power and use fear to oppress people, anywhere, anytime.