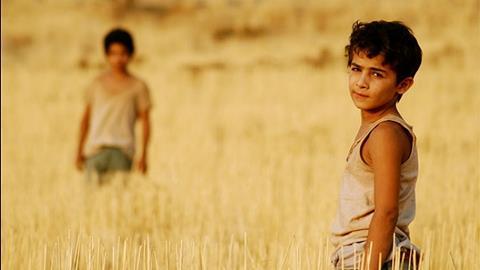 As a simple tale of attempting to achieve the impossible dream, the beautifully shot Bekas – which means ‘parentless’ – works on various levels and presents an intriguing childlike perspective of Kurdistan, Iraq, in the early 1990s, when Kurds were desperate to escape the country and Saddam.

Bekas has the warmth and passion (and sweetly freewheeling story) to appeal to younger audiences.

Shot with passion and with non-actors (the two young leads offer gritty enthusiasm rather than any great acting skills), the film is also semi-autobiographical, with writer/director Karzan Kader leaving the region in 1991 aged six with his brother, and declaring that Bekas is his story. The film sceeened at the Dubai International Film Festival.

More likely destined to festivals which have sidebars for children’s cinema, Bekas has the warmth and passion (and sweetly freewheeling story) to appeal to younger audiences, though it may be a bit to twee and at times ungainly for adults.

The film opens amusingly, clearly laying out the deep relationship between brothers Dana and Zana (Zamand Taha and Sarwar Fazil), a parentless pair who struggle to get by but who are still innocents at heart. Opening on a dusty soccer pitch in 1990 where they encourage and blame each other, the game is interrupted with the great news that the local cinema is showing Superman.

The kids all rush to try and get into the cinema, though Dana and Zana take the alternate route and climb onto the building’s roof to try and watch through a skylight. They are promptly chased away, but a glimpse of this superhero fuels a childlike fantasy to escape to America where – clearly – Superman lives.

So begins their (at times dangerous) attempt to cross borders and reach America. They have no idea where it is (“just a few miles away” one assumes) and draw their own passports, but despite virtually no help from adults – who are generally abuse towards these two urchins – they head off on their road trip, initially on a donkey, but then in the back of cars or hiding underneath trucks.

There are a few moments of drama and a glimpse of where the film may go if Kader had decided to make it more realistic and darker, but he opts for melodramatic childish enthusiasm to drive the story (though the two young stars do tend to shout most of their lines rather than deliver them with thought) towards a sense that they may well eventually succeed in their drive to escape.