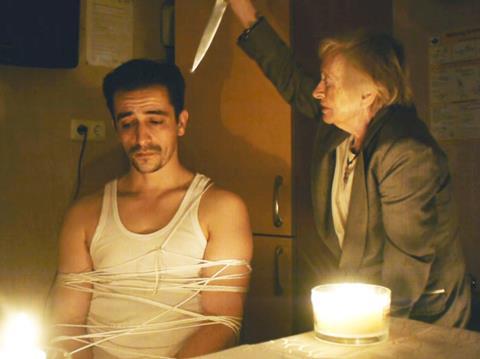 All the troubles of the Western World are squeezed down into a nutshell for this tremendously pretentious but pretty unnecessary picture. As short as his film is, Peter Kern manages to establish in it that the West is old, decrepit, bloated and hysterical, terrified by the “others”, particularly when they come from Africa, and ready to kill indiscriminately to preserve its way of life.

It is the kind of topic the media never tires of, but just putting together the highlights in an allegorical fashion is hardly enough.

Belief, Love, Death (Glaube, Liebe, Tod) sounds like another Oswald Spengler treatise on the decline of the west, but there is very little attempt to understand, analyse or even discuss it, the facts are there, to be accepted or else.  All Peter Kern needs to convey his message to the audience is a brief chamber piece, featuring two leads and a supporting role, and that’s about it.

A woman in her eighties, Elvira (veteran Austrian actress Traute Furthner) and her obese son, Peter (played by director Kern), are sitting in a limousine, on their way to the houseboat Mamma has hired in Brandenburg for the health of her son, or so she says. This is the image of the West riding into the sunset.

Mamma represents the tough, old generation, who pushes people around, must have everything her own way and still fondly remembers the “adorable” Hitler entering Vienna. Peter, a mountain of flesh that can hardly breathe, lives in a home for disabled persons, wets his bed at night every time he has a bad dream. He is a hapless, hopeless son of an overfed, mentally impaired generation, who still have the money and the authority it inherited, but has no other worries in life, except the fear of death he recognises at one point.

By this time, there is little doubt left that Kern’s film is more of a lecture than a dramatic piece. The car stops on the way to pick up a “Third World” hitchhiker, just like the West invited the emigrants in, but then he is gone without explanation. By the time Mamma and her son reach the houseboat, set out on their leisurely trip down the river and launch into a series of generational conflicts, during which she never fails to remind him, ironically, of his blood pressure and sugar while he accuses her of having never behaved like a real mother.

Then, the boat’s motor suddenly dies - just like the Western world is doing right now - and a stowaway turns up on board… unsurprisingly the same “Third World” hitchhiker introduced before. As long as he sweeps the floor without protesting, there is no problem and loveless Peter would ask nothing better than a little flirtation with the winsome emigrant named Abdel(Joao Moreira Pedrosa).

But when Abdel pulls out an explosive belt and offers it to his new friend as a present, all hell breaks loose. Mamma takes the initiative and raises a kitchen knife, Peter allows himself, as the typically impotent intellectual he is, to be swept away by Handel and Verdi and the metaphor breaks loose from the strict confines of the houseboat to embrace the entire world. Documentary footage is introduced out of nowhere showing all the massacres of recent years, with angelic choirs in the background to underline the horror.

There isn’t really much that is new or original in all these statements of facts. Kern speaks for a large consensus of the left, living in luxury and comfort but riddled by guilt and anxiety, powerlessly dreading impending doom. It is the kind of topic the media never tires of, but just putting together the highlights in an allegorical fashion is hardly enough. Whether one agrees with Kern or not, there is a lot more that should be said about it.