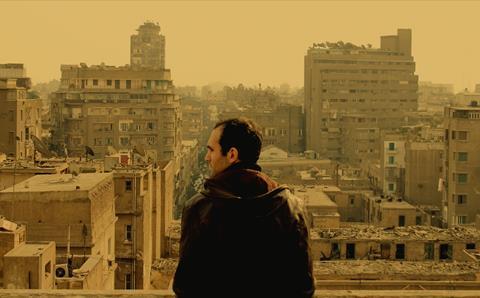 The line-up for the 46th Berlinale Forum has been announced and will feature a total of 44 films in its main programme, of which 34 are world premieres and nine international premieres.

One focus of this year’s programme is the Arab region, with films shot by mainly young directors from an area that stretches between Egypt and Saudi Arabia, exploring both the past and present of their homelands.

In A Magical Substance Flows into Me, artist Jumana Manna sets out in search of the musical diversity of the Palestinian region.

Tamer El Said’s feature In the Last Days of the City (Akher ayam el madina) sends his alter-ego Khalid through the director’s home city of Cairo, which is in a state of uproar.

Maher Abi Samra’s documentary A Maid for Each (Makhdoumin) grapples with the employment of maids from the Global South in middle-class Lebanese households, a practice at once omnipresent and kept largely under wraps.

Barakah Meets Barakah (Barakah yoqabil Barakah) by Mahmoud Sabbagh is a candid Saudi Arabian love story, which uses acerbic humour as a counterweight to the difficulties the couple face.

War is also tackled in the titles. In Houses without Doors (Manazil bela abwab), Syrian-Armenian director Avo Kaprealian filmed the clashes on the streets of Aleppo from the window of his housing block over several years, linking together his portrait of the mainly Armenian neighbourhood with fiction and documentary images of the genocide carried out on the Armenians.

Civil wars, forced migration and the repercussions of exploitative working conditions are equally pressing issues in other regions, where filmmakers employ a wide range of cinematic forms to explore these subjects.

Documentary Ta’ang by Chinese director Wang Bing shows everyday life in a largely unknown conflict. While sections of the Ta’ang minority fight for independence against the Burmese army on the border with China, women and children seek refuge in provisional tents dotted around the valleys of the region.

Close by, before the backdrop of the armed struggle between the Burmese army and the Kachin Independence Army, director Midi Z follows his brother into the titular city of jade in Fei cui zhi cheng (City of Jade). With the mining companies having fled the skirmishes, young men now take advantage of the power vacuum to seek their fortune there, with opium on hand to make the risky work that bit more bearable.

Eldorado XXI by Portuguese director Salomé Lamas asks what makes people turn to such dangerous work as mining. The Peruvian town of La Rinconada is located at an altitude of 5,100 metres on the edge of a gold mine. A radical montage of images and sound aims to convey the scale of both the mining landscape and the physical effort it demands.

Philip Scheffner’s Havarie also conducts a formal experiment, this time one that grapples with the experience of forced migration and how it can be made tangible. A three-minute video clip of a tiny dinghy floating in the Mediterranean recorded by an Irish tourist on a cruise ship is extended to feature-length. With the coastguard’s radio broadcasts, the accounts of those possibly on the boat and the hobby filmmaker each included on the voiceover, the documentary pushes the standard representations of crisis situations.

A second film by Scheffner revolves around the representation of those who often don’t get a say in the process. The German director passes the camera on to Roma Colorado Velcu, who uses it to document his family’s new life in Berlin: And-Ek Ghes… is the portrait of a fresh start, staged by Velcu with wit and self-deprecation.

Andrea Bussmann and Nicolás Pereda’s Tales of Two Who Dreamt is set in a housing block in Toronto and pivots too on representation and self-representation. Here, another Roma family rehearses the stories of their past for the upcoming hearing on their residency status. Yet the occurrences in the housing block are also spun into legends, whereby the boundaries between reality and fiction and the documented and the performed no longer apply.

Mexican cinema is also in this year’s programme with two additional films from the country.

Joaquín del Paso’s utopian feature Maquinaria Panamericana (Panamerican Machinery) is the portrait of a factory on the edge of Mexico City in which productivity and progress are foreign concepts. When the boss of the small company dies and the staff realise he has been paying their wages from his own pocket for years, they are forced to take drastic measures.

One woman lands in a prison run by the drug cartels, while another loses her daughter: over images of a journey through Mexico, director Tatiana Huezo’s Tempestad connects two testimonies into an account of a country in the grip of organised crime.

American independent cinema is represented in this year’s programme with a total of three films. Robert Greene’s Kate Plays Christine has Kate Lyn Sheil slip into the role of news anchor Christine Chubbuck, who shot herself live on television in 1974. Research, interviews, wigs and contact lenses, reconstructions: just when is it that acting begins?

In Fantastic by Offer Egozy, a telegram from a missing painter brings together an ambitious sheriff, a former lover and two old acquaintances. A film noir suffused with film history comes progressively into focus, whereby tension is generated by atmosphere rather than plot.

Ted Fendt’s Short Stay is the only film to be screened at the 46th Forum on 35mm. The story cetnres on Mike, who still lives with his mother and spends his time drifting through the New Jersey suburbs. When a job and an apartment in Philadelphia fall into his lap, it seems like a new start. But he discovers that while you can change your context, you cannot change yourself.

The new film by French director Guillaume Nicloux sends Gérard Depardieu into the woods as a solitary hunter. In Dans les bois (The Wandering), the protagonist loses first his dog and then his way. A summer stroll soon morphs into a fantastical excursion from which there is no escape.

A search also anchors Eugène Green’s Le Fils de Joseph (The Son of Joseph), a further French production showing at this year’s Forum. Vincent grew up with his mother and now wants to find out the identity of his father. His investigations lead him to the God-like figure of the Parisian literary world, a Machiavellian scoundrel played by Mathieu Amalric.

Baden Baden is the directorial debut by Rachel Lang. After a job turns sour, Ana, who is in her mid-twenties, returns to Strasbourg to be close to her beloved grandmother and best friend. While juggling a hopeless affair, a self-set task and a farewell, she looks for her place in the world.

Bence Fliegauf, who showed his debut film Rengeteg at the Forum 13 years ago, returns to the programme with his new feature Liliom Ösvény (Lily Lane). The relationship between Rebeka and her young son Danny is inextricably linked to stories and fantasy: the account of a childhood in which time and space flow together and little separates divorce, death and reunion.

Austrian director Nikolaus Geyrhalter has also already shown several films at the Forum. His fantastical Homo sapiens depicts a disquieting scenario whereby the world made by people is slowly won back by nature: it is science fiction and documentary in equal measure, equal parts contemporary and post-apocalyptic.

The films of the 46th Forum

Die Geträumten (The Dreamed Ones) by Ruth Beckermann, Austria - WP

How Heavy This Hammer by Kazik Radwanski, Canada - IP

Makhdoumin (A Maid for Each) by Maher Abi Samra, Lebanon / France / Norway - WP

The Revolution Won’t Be Televised by Rama Thiaw, Senegal - WP