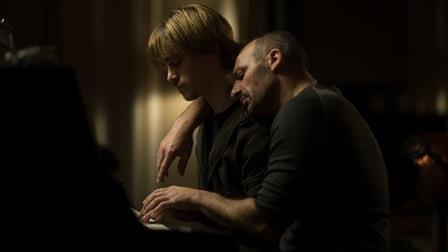 Charting the rise and fall of a love affair from giddy beginnings to rueful afterglow, Beyond The Walls (Hors Les Murs) marks an accomplished first feature from writer/ director David Lambert. An intriguing storyline, confident execution and charismatic performances from the lead actors carry the film through some unexpected plot developments that push it towards more stereotypically anguished gay movie romances. The first half comes closer to the tone of Andrew Haigh’s award winning Weekend and might give the film a shot at a similar audience. Further Festival appearances and interest from specialist gay distributors seems guaranteed.

Lambert’s greatest talent may lie in creating characters that we care about and developing a film that brings a few fresh twists to an old familiar tale of whether love can conquer every obstacle in its path.

Beyond The Walls begins in similar fashion to Weekend with the consequences of a drunken evening where Paulo (Matila Malliarakis) has caught the twinkling eye of bartender Ilir (Guillaume Gouix) who winds up carrying him home over his shoulder and giving him a bed for the night. Ilir avoids temptation but there is an obvious spark of attraction and they see each other again. Once Paulo’s suspicious girlfriend has dumped him he boldly arrives at Ilir’s flat with all his worldly goods.

Malliarakis’s Paulo is all Bambi-eyes and puppy dog devotion as he clings to Ilir like a lifesaver in stormy seas. Initially, the character is as endearing as he is annoying. The older Ilir is more guarded and wary of turning a few lighthearted encounters into something more meaningful. Over the course of the film events conspire to reverse their early roles with Paulo emerging as the stronger of the duo and Ilir the more needy.

The first half of the film is easily the most charming. The two actors make a cute couple and there is a good deal of relaxed humour and warmth in the screenplay as the characters open up to each other and a relationship develops. Shopping for supplies in a sex shop or belligerently demanding condoms from a corner shop are amongst the funniest moments in the film.

The second half is more melodramatic and downbeat with events placing the relationship under unbearable pressure. Lambert is economical in the way he prunes back the narrative, dispensing with the need for lengthy explanations of what happens to Ilir and how this changes his life and his easygoing manner. It tells us just what we need to know to keep the focus on the ebb and flow of the ties that bind the central couple.

Lambert’s greatest talent may lie in creating characters that we care about and developing a film that brings a few fresh twists to an old familiar tale of whether love can conquer every obstacle in its path. On that basis, Beyond The Walls fulfills the promise of his previous work as a screenwriter and short filmmaker.