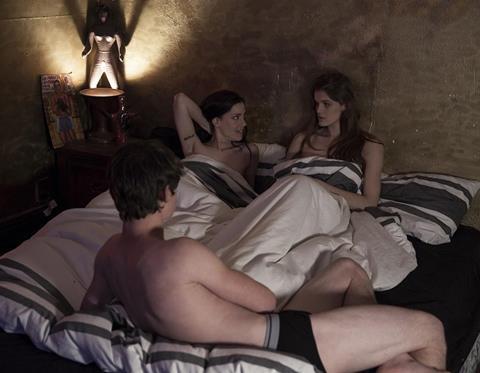 Bizarre is set the in the Brooklyn bar/club of the same name which is owned by the French filmmaker Jean Stephane Sauvaire. In director Etienne Faure’s wafer-thin, scantily-plotted fiction feature, it’s a burlesque-grotesque, fetish sort of place in which outsized women in clownish makeup take carving knives to their vaginas. Shocking? Not really. Bizarre is a challenge, but not in the ways Faure intended.

Those younger than its 1999 release date may be scandalised by Bizarre, and find all this a revelation, but this film falls somewhere between a documentary with no context and a story with no plot.

Faure has concocted the sketchiest of stories around a pretty young French runaway called Maurice (model Pierre Prieur), who ekes out a living flipping burgers in Brooklyn dives. In a halting voiceover, Maurice says he’s speaking in English “because the director asked me to.” “I don’t really exist,” he warns.

By an artfully-occluded plot contrivance which harsher critics might call lazy – a train rolls by at Myrtle Station, obscuring the dialogue – Maurice is approached to help out at Bizarre, cleaning tables in exchange for a room in the building. Bizarre is owned and run by a lesbian couple who are quite keen on three-ways with hot young boys, pawing Maurice in the shower and alienating a good deal of the L in the LGBT circuit audience, although it could be a B title.

Bizarre is also home to a beautiful boy bartender in the Tadzio vein called Luka (Adrian James, showing a natural talent despite the camera’s swoonsome over-attentiveness to his delicate profile).  Maurice flirts sweetly with Luka and spends time in the boxing ring with sex-crazed straight boy Charlie, swopping towels and sultry stares. Is Maurice gay, is he straight, is he a lesbian? Can he act? Who really cares? Bizarre is a tease, and Faure pads the piece with lengthy footage from transgressive cabaret acts as if to compensate for its essential emptiness.

Wrapping up in a messy hurry, Bizarre is shot stylishly with an over-reliance on hand-held footage which tracks Maurice faithfully from behind as he plods around the same streets in his tight t-shirt and bum-hugging jeans. Rooftop shots and a Coney Island interlude are familiar, but eye candy nonetheless. Music is clubby and grinding, with screeching trains adding to the general cacophony.