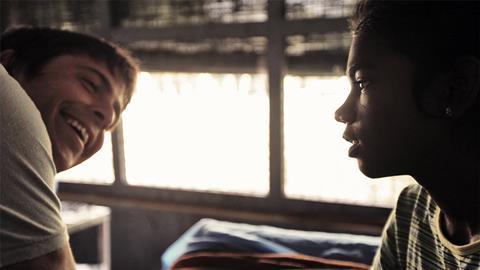 There is an indisputable affective power in the story of poor Indian children suffering from HIV and AIDS—which this American-made documentary taps into. But in focusing on Rocky Bratt, a young man from Pittsburgh who has dedicated his life to helping the ailing youngsters, Blood Brother misses its mark, emphasising the struggles of a wandering Westerner, as seen by his filmmaker best-friend, rather than giving a fuller understanding of the painfully tragic lives of those he wants to help.

Hoover’s almost Pollyannish approach, particularly for the film’s first half, may be intentional, as a way not to put off audiences from the tough subject matter.

Still, Blood Brother should appeal to audiences interested in human rights issues and the international AIDS crisis. And with a protagonist not unlike them, Western viewers could find themselves drawn into the story, in broadcast and very limited theatrical runs.

But the fact that audiences will leave this documentary, about a rural AIDS orphanage, remembering the name of just one afflicted child—”Surya,” whose story is admittedly remarkable—may be evidence of first-time feature filmmaker Steve Hoover’s misdirected focus. It might be unfair to criticise a film for what it’s not, and Rocky’s sacrifice and sensitivity is unquestionably honorable, even heroic. However, Hoover’s tourist-eye-view ultimately keeps audiences at a distance from the very young people it wants to support.

In what should be one of the film’s most disturbing sequences, for instance, Rocky tries to rescue a sick girl from the local village and bring her to the hospital. It’s a harrowing moment, introduced in the film’s opening and returned to later, but the traumatic effects of the incident on the girl’s family and community is hardly represented; instead, we see Rocky collapsing in tears the next day.

Granted, the film’s central aim is to follow Rocky’s conflicted psychological roller-coaster ride—and it does so somewhat effectively, showing the disconnect he feels when he’s away, but the challenges he faces when he’s in India.

But Hoover’s outsider’s perspective and John Pope’s beautiful cinematography continually favor the colorful exoticism of India over the gritty realities of Rocky’s circumstances. Hoover speaks of a one-night trip to an Indian slum as if it was a vacation stop; at another point, the fact that the village doesn’t have running water is almost romanticised instead of lamented.

Hoover’s narration can also be a bit too naïve and ingratiating. (“It’s almost stupid to describe it,” he says, after meeting the children, “the kids are beautiful… neat.”) And violating that classic tenet of drama—show, don’t tell—the impact of the experiences on the filmmaker are revealed via heavy-handed voiceover; as he says at one point, “It really changed my heart.”

Hoover’s almost Pollyannish approach, particularly for the film’s first half, may be intentional, as a way not to put off audiences from the tough subject matter. But in so doing, the documentary does little to convey what’s actually going on at the orphanage: We eventually find out the kids received important anti-viral drugs, but how did they get them? And will they continue to receive them? Such contextual questions are never addressed.

Late in the film, Blood Brother finally presents a more unflinching portrait—of Surya, struggling to survive in an Indian hospital, with Rocky dutifully, compulsively tending to the young boy’s swollen eyes and open sores. It’s undoubtedly the most powerful example of Rocky’s selfless benevolence in the movie. The images are horrible and riveting: This is what HIV does to the young, splitting open their flesh and clogging their insides with infection. But Rocky remains steadfast, and the outcome is miraculous. It would be nice to know what happened to Surya, but Blood Brother ends with a teary-eyed farewell embrace between the filmmaker and his subject.