Screen Gems’ comedy Think Like A Man Too opened on $30m to finish approximately $1m ahead of Sony stablemate 22 Jump Street, which powered past $100m in its second weekend. 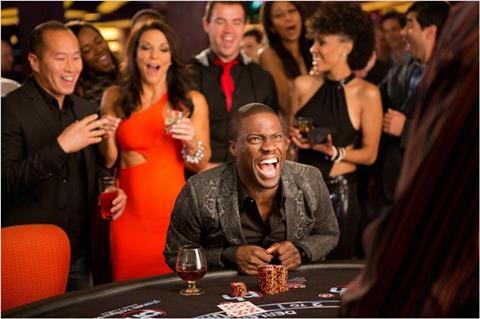 Warner Bros’ generally lacklustre start to summer continued as Clint Eastwood’s Jersey Boys arrived at number four on $13.5m from 2,905 sites. Unsurprisingly, the studio said 71% of the audience was aged over 50 and executives are expecting it to hold steady in the weeks to come.

By comparison Universal’s Ray opened on $20m in second place from 2,006 sites in October 2004, which adjusts to $25m when inflation is factored into the calculation.

The debut trailed the $33.6m opening weekend of the April 2012 predecessor, which translates to $34.8m when adjusted for inflation. The original went on to gross $91.5m in North America.

Whether or not it will be confirmed as the weekend champion on Monday, 22 Jump Street is doing its studio proud and dropped 49% to add $29m from 3,306 for $111.5m in the second session. Jonah Hill and Channing Tatum star.

DreamWorks’ How To Train Your Dragon 2 reached $95.2m after two sessions and is tracking on par with the 2012 original.

Maleficent has generated $185.9m for Disney after four weekends and more than $521m worldwide to rank as the biggest live-action release of Angelina Jolie’s career.

Fox’s X-Men: Days Of Future Past stands $216.8m after five and is closing in on $500m internationally.

Warner Bros’ Edge Of Tomorrow has mustered a dismal $74.5m after three, although the sci-fi action release has surged past $200m internationally.

Godzilla has brought a smile to studio executives’ faces and stands at $194.9m after six and $282m internationally.

Overall box office for the top 12 dropped 21% against last weekend and fell around 40% against the same session in 2013, a harsh comparison given that Monsters University and World War Z completed a one-two sweep that combined for $148m.

This week most of the studies go into hibernation as Paramount prepares to unleash Michael Bay’s Transformers: Age Of Extinction starring Mark Wahlberg on June 27.