Paramount/Skydance’s Mission Impossible: Rogue Nation heads into the second session and will have to muster all its charm to resist the advance of Fantastic Four. 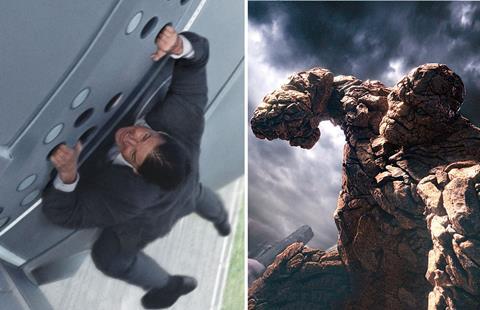 Tom Cruise has coaxed $89.4m out of audiences in around 40 territories and infiltrates Germany, Russia, Spain and Japan this weekend via Paramount Pictures International.

However all eyes will be on Will Cruise’s alter ego Ethan Hunt. Does he have enough to fend of the challenge of Fantastic Four? Despite abysmal reviews in the US should trade on the name alone to pack a considerable punch in its opening weekend.

The YA adaptation Paper Towns stands at $27.2m and opens in Spain, while Spy has grossed $124.1m and Dragon Ball Z: Resurrection F $51.7m. Kwai Boo arrives in China and True Story opens in Germany.

Pixar’s Inside Out stands at $286.1m and debuts in Taiwan and Lebanon, while Marvel Studios’ Avengers: Age Of Ultron has grossed $942.1m.