NOV 30 UPDATE: The Hunger Games: Mockingjay - Part 2 resisted a dazzling Chinese debut from The Martian to hold on to pole position in the international arena thanks to an estimated $63.1m weekend haul. 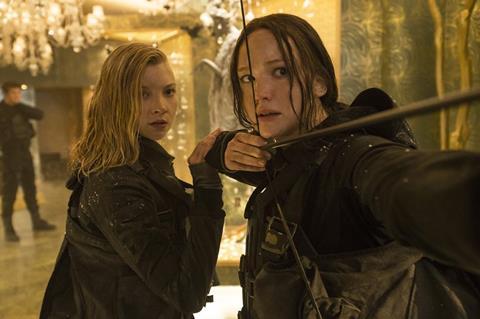 UPDATED: The action adventure stands at $243.7m after 12 days of release and $442m globally. The four-film franchise has reached $2.7bn worldwide.

UPDATED: The Martian made good use of a storyline that features a life-saving collaboration between the Americans and Chinese to storm into China on number one and an estimated $49.9m on 4,848 screens over five days.
Approximately $6.6m of that amount came from 249 Imax screens. Indeed Imax generated more than $15m worldwide across several films including Mockingjay 2 and Spectre.

The space thriller has amassed $19.7m in France after six sessions, $19.3m in Australia after nine, $16.4m in Germany after eight and $12.2m in Spain after seven. Japan will be the final market to release in February.

Pixar’s The Good Dinosaur - a number two debut in North America over Thanksgiving weekend - opened in 29 territories on $28.7m.

Spectre stayed top in The Netherlands for the fifth weekend on $1.3m for $15.8m to become the biggest film of the year-to-date. It held on to number one for the fourth session in German-speaking Switzerland, where $899,000 boosted the tally to $10.2m. India has generated $7.4m after two.

Hotel Transylvania 2 added a further seven markets and grossed $4.8m from 75 to reach $270.3m with South Korea still to come on December 24.

UPDATED: Universal executives reported the studio’s box office in Spain for the year-to-date has crossed €143.4m, which it said was the highest box office ever achieved by any company in one year in Spain.

Ocho Apellidos Catalanes (Spanish Affairs 2) stayed top in Spain in its second weekend as $5.7m from 394 venues elevated the tally to $17.5m.

After nine days the film usurped Fast & Furious 7 to rank as the fifth biggest release in Spain so far in 2015 behind Minions, Jurassic World, Inside Out and Fifty Shades Of Grey.

The Hunger Games: Mockingjay - Part 2, which Universal releases in Italy, held on to number one as $1.7m raised the tally to $7m.

The Visit opened in its final markets of Brazil, Italy, Russia, Bolivia and Uruguay and the weekend haul of
$1.9m boosted the running total to $30.1m.

cCreed took $2.5m from seven territories and arrived in Australia on $1.2m from 188 screens. Creed is an MGM production in association with New Line and is marketed and distributed by Warner Bros.

Scouts Guide To The Zombie Apocalypse stands at $10.3m and Paranormal Activity: The Ghost Dimension $59.2m.