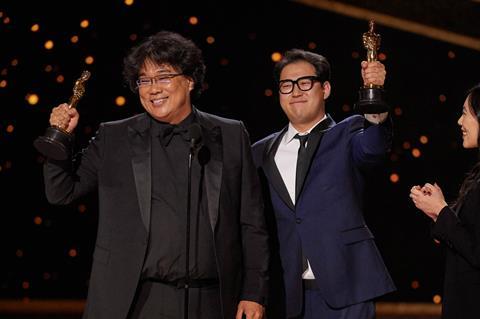 Parasite has crossed $200m at global box office, fired up internationally and in the US by last weekend’s historic Oscar haul that included a best picture win.

The South Korean dark comedy added $18.3m globally over the weekend to propel the running total to $204.3m.

Of that amount, $12.8m came through CJ Entertainment licensees for a muscular $161.1m tally.

Neon reported a $5.5m three-day US weekend haul that delivered the film’s biggest session in 19 weekends and boosted the running total to $43.2m.

Parasite broke into the top 10 after climbing three slots to number eight and is estimated to earn $6.7m over the four-day President’s Day holiday.

The distributor said the $5.5m haul represented the largest post-Oscar bump in 10 years, and added that the screen count marked the highest for a foreign-language film since Kung Fu Hustle on 2,503 back in 2004. Insiders say Parasite could cross $50m by the end of its US run.

Neon also officially released Celine Sciamma’s Cannes premiere Portrait Of A Lady On Fire, which had launched in New York and Los Angeles last year to qualify for awards consideration. The drama expanded into 22 markets and earned $440,907 resulting in a $20,041 average. The $514,707 four-day estimated gross delivers a $23,396 average. After the four-day weekend the running total will be estimated to be $633,310.

Paramount’s Sonic The Hedgehog opened top in North America on $57m from 4,167 theatres, a mighty haul that overtook the $54.3m debut set by Pokemon Detective Pikachu last year to rank as the top North American debut for a video game adaptation, and one of the best President’s Day launches. James Marsden, Jim Carrey and Ben Schwartz feature in the voice cast.