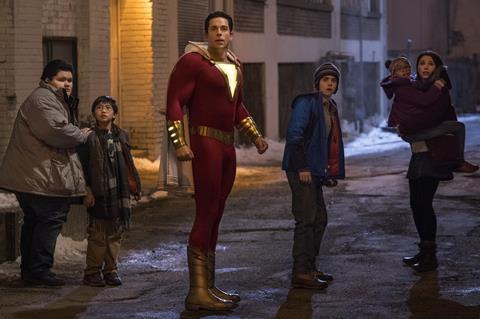 APRIL 15 UPDATE: Shazam! held on to its North American box office crown thanks to a confirmed $24.4m haul through Warner Bros, fending off a number two debut by Universal’s body swap comedy Little and a disappointing number three arrival by the Hellboy reboot.

Universal’s comedy Little from super producer Will Packer starring Issa Rae, Regina Hall and youngster Marsai Martin, arrived in second place on $15.4m in 2,667 theatres. It was a solid debut for the film, which cost $20m to make, excluding marketing costs, according to reports.

Martin pitched Packer the story of a stressed-out adult who awakens one day as her younger self. Speaking at the recent CinemaCon event in Las Vegas, Rae told exhibitors that the 14-year-old Martin is the youngest executive producer in Hollywood history.

Hellboy, the independently financed reboot directed by genre specialist Neil Marshall that stars David Harbour in the lead role of the supernatural do-gooder, opened in North America via Lionsgate-Summit in third place on $12m in 3,303 venues. Milla Jovovich stars as a sorceress and Hellboy’s nemesis. Hellboy opened day-and-date in virtually every international market through Millennium Media licensees.

This was the lowest opening weekend for a Hellboy film. Guillermo del Toro’s April 2004 original Hellboy opened through Sony/Revolution on $23.2m ($31.4m when adjusted for inflation), while del Toro’s Hellboy II: The Golden Army opened through Universal in July 2008 on $34.5m ($39.9m in real terms.)

YA romance adaptation After starring Josephine Langford and Hero Fiennes Tiffin opened in eighth place on $6m in 2,138 sites through Aviron. The film opened day-and-date in a number of international markets and is licensed internationally by co-financier Voltage Pictures.

Disney’s Dumbo is yet to cross $100m, and ranks fifth on $90.2m after three. While the family film stands no chance of breaking even based on the North American box office, the $177m international running total helps, although so far it is not enough. The film reportedly cost $170m to make and that number does not include marketing.

IFC secured US rights to Mary Magdalene in the wake of the collapse of The Weinstein Company, and it opened the biblical drama from See-Saw Films and Porchlight Films at number 33 on a lacklustre $62,436 in 62 venues. Rooney Mara and Joaquin Phoenix star and Garth Davis directed.

This week’s wide release is New Line’s horror The Curse Of La Llorona via Warner Bros.