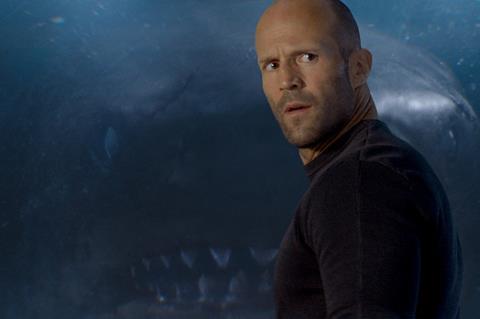 AUGUST 13 UPDATE: The Meg took no prisoners in its North American debut, beating projections that put the film opening in the $20m range to devour the competition on a confirmed $45.4m launch that tore past Mission: Impossible – Fallout in its third session.

The giant shark thriller starring Jason Statham and Li Bingbing launched in 4,118 theatres through Warner Bros, while Tom Cruise fell 45.2% and one slot to number two, adding $19.4m for $161.3m via Paramount. Despite strong reviews, the latest instalment remains the second-lowest release in the six-film spy action franchise.

Screen Gems debuted its horror film Slender Man at number four on $11.4m in 2,358 sites, while Focus Features’ BlackKklansman from Spike Lee arrived in fourth place on $10.8m from 1,512 to score the director’s best debut in a decad

John David Washington stars as Ron Stallworth, the African American police officer who infiltrated the KKK. Adam Driver also stars in the Cannes premiere, which Focus executives said attracted a 59% crowd aged 35 and above, with African Americans comprising the 23% bulk of film-goers, and a 52%-48% female-male split.

Ant-Man And The Wasp crossed $200m on Friday, and ranks 10th on $4m for $206.5m through Buena Vista after six weekends. In another benchmark performance, Mamma Mia! Here We Go Again crossed $100m on Saturday and fell three slots to number seven, adding $5.9m for $103.9m after four.

Disney’s Christopher Robin dropped a respectable 47.3% in its second session, adding $12.9m via Buena Vista for $50.5m in a number three finish.

LD Entertainment’s comedy opened Dog Days at number 12 on $3.6m from 2,442 sites. In the limited arena, there were debuts for a couple of Sundance 2018 entries. O-Scope opened the mystery thriller Madeline’s Madeline at 48 on $18,009 in a single venue, while Magnolia Pictures debuted the skateboarding drama Skate Kitchen at 47 on $18,065 in a single venue.