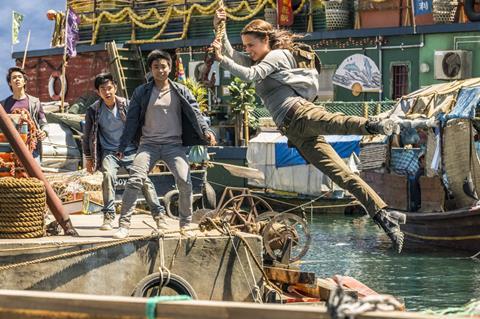 MARCH 19 UPDATE: Tomb Raider defeated Black Panther at the international box office at the weekend on a confirmed $87.2m as the Warner Bros and MGM action adventure vaulted to the top of the global and international charts. Meanwhile Oscar winner The Shape Of Water crossed $100m.

UPDATE: Audiences responded strongly to Tomb Raider starring Alicia Vikander in the role of thrill-seeking heiress Lara Croft as the action adventure climbed to an early $105.2m internationally from the first two weekends. This was powered by $41.3m from its first three days in China, where the film delivered Warner Bros’ seventh highest opening weekend.

Spain generated $1.4m, Indonesia climbed to $4.1m after a $1.1m haul in the second weekend, and Holland delivered a $1.1m debut on a par with Wonder Woman. Warner Bros and MGM co-produced Tomb Raider and handle international distribution jointly.

MARCH 20 UPDATE: Black Panther climbed to $583.8m internationally and $1.191bn worldwide by Tuesday. Over the weekend it added $58m worldwide to propel the running total to $1.183bn and finished the session as the 14th highest global release in history.

The Marvel Studios release overtook Captain America: Civil War on $1.153bn and Minions on $1.159bn in the global pantheon, while the international box office climbed by $31.3m for $580.1m and ceded the crown to Tomb Raider.

Black Panther ranks as the fifth highest Marvel Cinematic Universe (MCU) release after it passed Spider-Man 3 on $554m, and is approaching $100m in China as the tally reached $96m after 10 days.

Ava DuVernay’s fantasy adaptation A Wrinkle In Time added $3.6m for an early $11m from 11 material territories and stands at $5.4m in Russia, $1.8m in Spain, and $1.2m in France. The worldwide haul has reached a promising $71.7m after two weekends.

It overtook Finding Dory on $542m and The Lion King on $546m to rank as the fourth highest new IP animated release behind Frozen, Zootopia, and Finding Nemo. China and Mexico will finish as the top two markets and stand at $183.5m and $57.9m.

UPDATE: Peter Rabbit debuted at number one in the UK on a superb $10.1m, and arrived in Mexico in second place on $1.4m. Overall the family adaptation added $16.1m from 22 markets for an early $43.6m and $146m worldwide. It opens this week in Australia, Brazil, Germany, Italy, Russia, and Spain.

The animation Sherlock Gnomes opened in its first five international markets this weekend on $2.1m led by $1.4m in Russia.