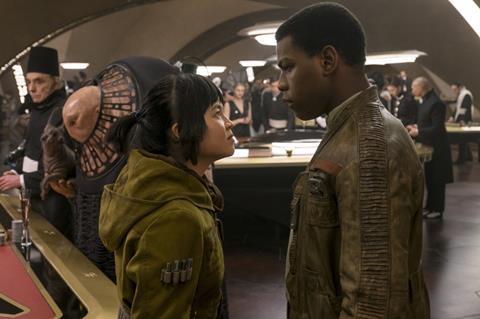 Dollar amounts are based on today’s conversions.

The film is neck-and-neck with Beauty And The Beast (also Disney) in the race to be the highest grossing film of 2017 in the UK. A Disney source told Screen that Beast might edge it, but this is not yet confirmed.

Over the festive period The Last Jedi passed $1bn at the global box office, ending 2017 as the third biggest release of the year.

Expect its global total to rise noticeably when it opens in China on January 5.

The action comedy starring Dwayne Johnson, Kevin Hart, Jack Black, and Karen Gillan officially opened in the UK on 20 December, but was also previewed from Dec 8-10, taking $2.8m (£2.1m) from 517 sites, before leaving cinemas for 10 days.

This week sees the saturation release of Sony’s All The Money In The World, which was hastily re-edited when Kevin Spacey was replaced with Christopher Plummer.