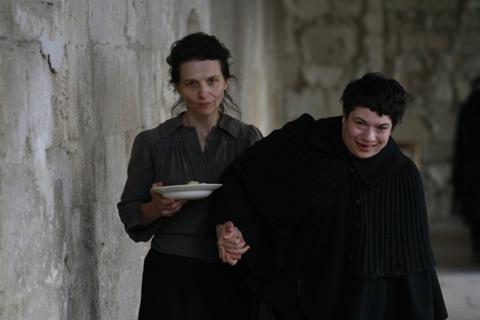 Accomplished and provocative as they were, Bruno Dumont’s last two films Hadjewijch and Hors Satan made it seem as if the French director had settled into a groove of making what could be easily categorised as ‘Bruno Dumont films’. With his ambitious Camille Claudel 1915, Dumont has made not so much a departure from his previous work, more an amplification and indeed a deepening of it.

This is in fact very much a feminist piece, with its emphasis both on female discourse – Camille’s lucid directness is played against Paul’s self-regarding mysticism – and on the female body and its travails.

Boasting a mesmerisingly intense yet controlled lead by Juliette Binoche, Dumont’s film depicts a period in the life of sculptor Camille Claudel, committed by her family to an asylum in the South of France. Her experience there is examined by Dumont both as a topic in its own right and as a springboard for a complex and testing investigation into madness, the clinical system and the nature of religious and artistic inspiration. This extremely serious, intellectually challenging piece demands a lot from its viewers, but art-house audiences in search of truly substantial material to chew on will give the film significant niche presence.

The setting is an asylum near Avignon, where Camille lives a seemingly uneventful life among the other inmates – played by real-life mental patients, most of them with some degree of physical disability. Camille enjoys a close, quietly tender relationship with many of them, but largely keeps herself at a taciturn distance from her companions and from the hospital staff. Her own mental state is indicated by the occasional angry outburst or tearfulness, and by her conviction that there’s a plot to poison her; in fact, she believes the chief culprit to be her former lover, fellow sculptor Auguste Rodin.

The first hour follows Camille’s life in the asylum, which – with its bare stone cloisters – is remarkably like a convent. Early on, Camille’s status as an intent observer of the world is suggested by moments in which she simply gazes at walls, windows and patches of carpet; later, she is first amused, then distressed to see two other patients rehearsing scenes from Don Juan. A session with her doctor (Robert Leroy) reveals Camille to be subject to paranoid delusions, yet highly articulate and lucid about her condition and her confinement.

The film then takes an unsettling detour, as Dumont follows Camille’s brother, the Catholic poet-playwright Paul Claudel (Jean-Luc Vincent), as he prepares to visit her. After jotting a section of his journal (the film draws heavily on the writings of both siblings), Paul tells a priest how Arthur Rimbaud’s poetry triggered his own spiritual illumination.

Himself in a state of austere religious exaltation that seems akin to madness, Paul proves cold and distant when he finally visits Camille, and certainly lacking in any familiar form of Christian charity, as the end captions reveal: despite her doctor’s declaring her ready to leave the asylum, the Claudel family kept her confined there for another 29 years until she died.

Dumont’s film is radically different from Bruno Nuytten’s 1988 Camille Claudel, a stormily romantic take on the sculptor’s relationship with Rodin. By contrast, Dumont focuses on some familiar arguments about artistry, madness and the price people pay to be creative, but also raises the matter of what it means to be an artist when one is forcibly prevented from practicing one’s art: a question which gives the film an implicit political dimension.

This is in fact very much a feminist piece, with its emphasis both on female discourse – Camille’s lucid directness is played against Paul’s self-regarding mysticism – and on the female body and its travails. The key to Binoche’s performance is not her emoting, so much as her being a very powerful physical presence in front of the camera, her unvarnished, gaunt features here making her general opacity all the more tantalising a screen for the viewer to read.

Dumont’s use of non-professional actors has always been controversial, and no doubt there will be accusations of exploitation in his use of seriously disabled patients effectively playing themselves. But he shoots them with a detachment that’s manifestly respectful, indeed tacitly compassionate. Guillaume Deffontaines’s stark photography gives the film a more naturalistic look than previously seen in Dumont films, underlining this film’s affinities with such French masters of the austere as Jacques Rivette (in films such as Jeanne la Pucelle), Maurice Pialat and Alain Cavalier.