EXCLUSIVE: Organisers behind the Cannes Marché’s third NEXT event set to run from May 12-18 have lined up an expanded future of cinema showcase that places heavy emphasis on the fast-rising world of virtual reality. 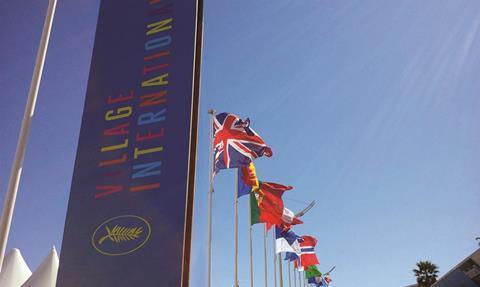 For the first time NEXT events will take place at the entrance of the Village International on the Pantiero side – the site previously occupied by Canal+ – and will feature installations, interactive films, screenings, conferences and workshops on subjects such as big data, theatres of the future, and VOD opportunities.

The NEXT schedule will include 15 innovative companies that will conduct business at the NEXT Pavilion. Creative Wallonia and the Canadian Film Center will have their own corner. The full NEXT programme will be announced shortly.

The centerpiece is the VR Days programme, a rich roster featuring work from the world’s leading exponents that takes place over May 15 and 16 and stems from a clamour by content creators to focus on arguably the most seductive growth area in entertainment. (Screen International is the media partner for VR Days.)

Industry attendees who obtain tickets the day before will be able to sample from the comfort of rotating chairs a multitude of 30-minute screening programmes (see below) comprising more than 35 VR projects.

Each slot will screen twice and is curated by international partners from a handful of countries with active VR industries. After the viewing session, attendees will move to the adjoining conference room to discuss the nuts and bolts of production and distribution with the creative brains behind the works.

PickupVRCinema will run the VR screenings because, according to the Marché, “it is the first space entirely dedicated to VR in France where audiences can discover VR content (movies and experiences alike) in the best conditions.”

“We see a boom of requests and opportunities this year for NEXT,” said Marché executive director Jérôme Paillard. “The fast evolution of the market is a catalyst for innovations from every domain, from financing to marketing.

“NEXT will be almost a village by itself where producers and professionals from around the world will be able to nurture. They will be able to discover a large spectrum of topics about the challenges and changes that the cinema industry today is facing.

“And with a spectacular VR installation they will be able not only to have a first experience in 360 degrees filming but also discover great films.”

In addition, NEXT will present two VR projects in the making: Fan Club by Vincent Ravalec (a-Bahn) and NEXT by Olivier Pesch (Samsa Films). Oculus Story Studio will discuss its early forays into VR and storytelling in the medium.

VR installations include the Matrix-like Real Virtuality by Artanim, a multi-user immersive platform combining a 3D environment with a real stage set, and Giant by Milica Zec and Winslow Turner Porter III, a five-minute exploration of war presented by HP.

“NEXT pavilion and its programming are exploding in sync with the arrival of VR and interactive films on the market,” said the Marché’s head of industry programmes Julie Bergeron.

“It was important for us to find a way of showing these films as a collective experience and offer a space where they can be presented in a market environment, not only as an individual experience. With the VR screening room, we are pioneering the possibility to book a market screening and offer a collective viewing of VR to the Marché participants.”

Bergeron said the schedule would break new ground. “For the industry, one of the big discussions we will have is how monetisation will evolve. There’s more and more content but it’s not the same model as film and it needs to be worked out… Who is going to pay for it and make money out of it?”

As to whether the NEXT pavilion would become a bustling hub of deal-making, the head of industry programmes said: “That’s the question… It’s for the industry and the idea for them is to discover [VR] and see the scope of it and what can be done.”

Bergeron added. “For film-makers [VR is] really powerful. In two or three minutes you understand physically and intellectually and emotionally everything about the subject… Film-makers understand very fast that they can tell the story with empathy. It’s a new way of storytelling.”

A ‘panorama’ of diversity

Michel Reilhac, artistic consultant for VR Days who has curated a special programme, said: “This first-ever VR Days at NEXT in Cannes proposes a panorama of the incredible diversity of the international VR landscape. 2016 is the birth year of VR as a new media accessible for everyone.

“I am amazed to see how artists, film-makers, animators, illustrators, writers… are already grasping the platform and contributing to the creation of a new language: the immersive storytelling where the spectator experiences empathy with the story, where the story becomes a total experience. This rich diversity is making virtual reality as a new art form. The VR Days prolific programme is the witness of its birth.”

Josh Sobel of US partner Furious M, which only began conversations with the Marché during the Frontières International Co-Production Market that recently concluded in Brussels, said the showcase offered the chance to influence public thinking on the medium.

“Furious M has been focused on bringing high-concept VR to the masses,” said Sobel. “We want to shape the way the public views VR and we believe that exposing them to high quality content in the right way is key to the success of this new medium. We work with storytellers and film-makers to bring their VR vision to the public.”

NEXT VR Days Sunday May 15 and Monday May 16

All synopses provided by Cannes Marché.

The Closet
Dir: Ian Tuason
Pdr: Ana Serrano
A CFC Media Lab Production
A young man investigates strange, supernatural forces in his new home when he discovers an even stronger, insatiable force where he least expects it.
Length: (5:00)

MADE IN USA VR

A US VR focus presented by Furious M.

Invasion!
Dir: Eric Darnell
Pdr: Maureen Fan
Baobab Studios
Baobab Studios’ Invasion! is a computer-animated VR interactive from the director of Madagascar that pits invading aliens against two meek, adorable creatures: fluffy white bunnies! And you are one of them.
Length: (6:08)

Repensando A Cuba
Dirs: Gabriel Lifton-Zoliine, Angel Manuel Soto
Pdr: Gabriel Lifton-Zoline
RYOT
RYOT went to Havana to see what everyday Cubans thought of Obama’s visit, the unconventional Cuba, and what makes Cuba so unique in people’s imaginations. We left enchanted by Cuba’s beauty and awed by its complexity.
Length: (4:45)

Butts: The VR Experience
Dir: Tyler Hurd
Pdr: Tyler Hurd
Tyler Hurd
BUTTS: The VR Experience is an animated VR short about love, trust, and learning what it means to be truly free. It’ll make you laugh, cry, fill you with unimaginable bliss, and return you to that innocent place of childlike wonder you’ve long forgotten.
Length: (2:07)

MADE IN FRANCE VR

Two VR programmes made in France presented by ARTE and Unifrance.

SENS
Dirs: Charles Ayats, Armand Lemarchand, Marc-Antoine Mathieu
Pdr: Marie Blondiaux
RED Corner, ARTE France
SENS is the first project to adapt a graphic novel into a VR experience. An anonymous wanderer roams in a stripped-down yet labyrinthine universe. All around him, arrows on ever-changing shapes. Where will it lead?
Length: (30:00)

I, Philip
Dir: Pierre Zandrowicz
Pdr: Okio
Based on the fiction world of Philip K Dick, the author’s mind has been preserved beyond death. Have his emotional memories been preserved as well?
Length: (15:00)

Jet Lag
Dir: Pierre Friquet
Pdr: Enfin Bref Productions
Separated by continents, two women express their love in the absence of each other through dance.
Length: (9:00)

Made In Quebec VR
VR films from Quebec, Canada, presented by SODEC and Phi Centre, in collaboration with the Québec Film And Television Council.

Inside The Box Of Kurios
Dirs: Félix Lajeunesse, Paul Raphaël, Michel Laprise
Pdrs: Stéphane Rituit, André Lauzon
Felix & Paul Studios / Cirque du Soleil Média
Step on stage and literally immerse yourself Inside the Box of Kurios Cabinet Of Curiosities from Cirque du Soleil! A mysterious and fascinating realm that disorients your senses and challenges your perceptions, leaving you to wonder: “Is it real, or just a figment of my imagination?”
Length : (10:00)

MADE IN DENMARK VR

Ewa (pilot)
Dir: Johan Knattrup Jensen
Pdrs: Mads Damsbo, Jakob Hegel
MAKROPOL, Meta Film
You will be born as Ewa, you will grow up as Ewa, and as Ewa you will fight to free yourself. You will struggle to accept your inner nature, confront your past and the one person that is holding you down – yourself.
Length: (8:00)

The Doghouse
Dir: Johan Knattrup Jensen
Pdr: Mads Damsbo
MAKROPOL, Dark Matters and Kanako
You are at a family dinner. Mum and dad have made roast beef. Older brother has brought his new girlfriend home for the first time and little brother is trying to avoid the inevitable disaster.
Length: (18:00)

Waves Of Grace
Dirs: Gabo Arora, Chris Milk
VRSE
Step into the virtual shoes of Decontee Davis, who recovered from ebola and now helps other victims of the disease in a township in Monrovia, Liberia.
Length: (10:00)

Drawing Room
Dirs: Jan Rothuizen, Sara Kolster
Step into the first “drawn reality” by Jan Rothuizen, about the “premium experience” of the tower room in an Amsterdam department store.
Length: (10:00)

My Mother’s Wing
Dirs: Gabo Arora, Ari Palitz
VRSE
In Gaza, foundations are built, destroyed, and built again. This virtual reality experience follows the struggle and strength of a mother coping with the death of her two children in the 2014 war.
Length: (8:00)

LoVR
Dir: Aaron Bradbury
A virtual reality love trip through the brain activity that occurs in the staggering moment you fall in love; a poem written in data.
Length: (5:00)

Simon
Dir: James Hedley
A young man with a disability claims his right to be seen and fully exist.
Length: (6:19)

Fabulous wonder.land
Dir: Toby Coffey
Fall down the rabbit hole and explore the magical, vibrant world of wonder.land in this animated musical video take on the stage show of the same name created by The Royal National Theatre in London. Watch and listen as the Cheshire cat hovers above like a magnificent holographic airship whilst serenading you to “Fabulous”, a song from the show.
Length: (4:00)

Sonar
Dir: Philip Maas
A drone receives a faint distress call emerging from an unknown asteroid. When it journeys to locate the source of the signal, it ventures into a deep, ancient labyrinth that holds a secret even darker than space itself.
Length: (6:00)

Fan Club (teaser)
Dir: Vincent Ravalec
a_Bahn
Vincent Ravalec takes you into his virtual universe. He presents his new film and the challenges he faces as a film-maker using virtual reality.
Length: (2:00)