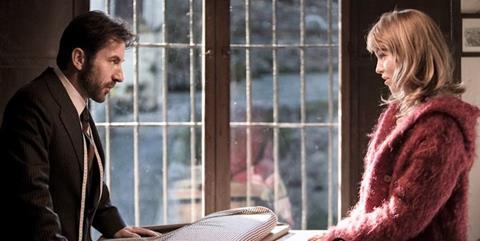 More a perverse character study than the gore-fest its title implies, Cannibal follows a shy mild-mannered tailor who kills beautiful women and eats them. The film displays the continuing potential of its Goya-nominated writer/director Manuel Martín Cuenca (Half Of Oscar, The Weakness Of The Bolshevik), featuring a few expertly crafted scenes of tension and some striking cinematography.

But without much of a substantive story, Cannibal doesn’t have enough meat to it, particularly to sustain its near two-hour running time. Given its attention-getting logline, the film should pique a certain amount of interest, but buyers beware: it’s less midnight movie and more apropos for art-minded outlets.

The film’s opening gambit is full of promise and unease: a man and a woman stand next to a small car parked in an abandoned gas station, lit by fluorescent lights and surrounded by darkness. As the couple gets into their automobile and drives off into the Granada night, it turns out we are watching from inside another car, which begins to follow them.

Soon after, the unseen stalker drives the couple off the road, drags the wounded woman from the wreckage, takes her to an abandoned cabin in the mountains, splays her nude body out, and proceeds to hack her up with a cleaver. For those who are squeamish, no need to worry; the slashing takes place off-screen.

From this lurid introduction follows the largely staid story of the reserved murderer, the handsome, well-dressed Carlos (Antonio de la Torre), going about his quotidian routine: cutting wool fabrics by day and cooking his precious flesh with a spicy marinade by night. One day, Carlos’ daily schedule is interrupted with the appearance of a new upstairs neighbor, a beautiful Romanian masseuse named Alexandra (Olimpia Melinte).

Tantalised by her seductive ways, the sexually repressed Carlos finds himself drawn to her in the only way he knows. But Carlos hasn’t counted on the arrival of Alexandra’s twin sister, the more timid Nina, who troubled by her sister’s vanishing, appeals to Carlos’ less carnivorous instincts.

The rest of Cannibal concerns Carlos and Nina’s relationship, and the inevitable question: Will he kill and eat her, too? But humourless and slowgoing, the movie can’t sustain itself based on this single note of suspense. Carlos always remains at a distance—a kind of Norman Bates figure with parental and religious issues that are never adequately explained. Indeed, there are a number of Hitchcockian references thrown into the film—with nods to both Psycho and Vertigo’s voyeuristic impulses—but they don’t add up to much. As a heroine, Nina is also thinly sketched, used mostly as a prop for Carlos’ struggles than a fully drawn love interest.

However, Cuenca knows when to move his camera—and when not to—always using carefully framed compositions to strong effect. And there are at least three brilliantly executed sequences brimming with tension. In one scene, Alexandra enters Carlos’ apartment, discovers the piles of meat that sit in his refrigerator and then asks for a glass of water, drinking it tauntingly in one long drawn out swallow.

Cuenca uses static long takes to build a sense of dread; you don’t know whether Carlos is going to kill her or kiss her. Another unnerving sequence finds Carlos on the prowl beachside, taunting a poor naked female swimmer. A climactic confrontation also ratchets up suspense and avoids potential clichés. Within these moments, Cannibal achieves the level of artistry and chills that it aspires to. But a few choice scenes aren’t enough to cut it.