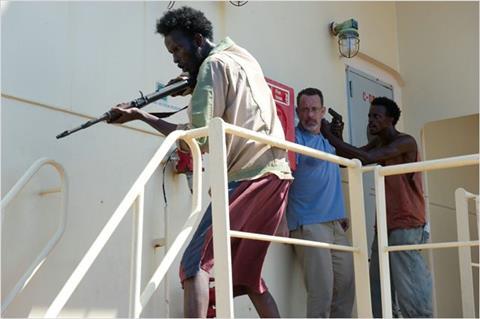 An enthralling and beautifully made action-drama driven by an absorbing lead performance from Tom Hanks (likely a shoo-in for yet another Best Actor Oscar nomination) as a stoical commercial shipping captain who finds himself kidnapped by Somali pirates Captain Phillips, the opening film at the New York, London and Tokyo film festivals, is a real-life drama that should attract strong reviews and positive marketing support as well as awards attention that should see it a heavyweight end of year performer, despite the fact that the hefty running time and slow-burn drama may work against it.

Paul Greengrass is a talented and sure hand, and shoots with a real sense of the epic scale of the tanker and warships set alongside the gritty reality of the confines of the vessels.

Elegantly directed by Paul Greengrass – back to telling a real-life story as he did in Resurrected, Bloody Sunday and United 93 – the film is a fascinating glimpse into the way Somali pirates work and chose their targets, with the story shrewdly balancing the back-story of the pirate who takes Captain Phillips (Hanks) prisoner with that of the shrewd pirate behind the plot, impressively plated by Somali newcomer Barkhad Abdi.

The story, scripted by Billy Ray and based on the book A Captain’s Duty: Somali Pirates, Navy SEALS, and Dangerous Days at Sea co-written by Richard Phillips with Stephan Talty, is set in April 2009, when Phillips assumed command of the container ship Maersk Alabama, which sailed from a port in Oman and sailed off the Somali coast.

The story is all handled in a pretty matter-of-fact manner – from the opening scenes of Hanks and Catherine Keener (a nice cameo as Mrs Phillips) discussing kids and home life as she drives him to the airport, set alongside Somali captain Muse (Abdi) choosing his crew for his skiff to set out to look for a ship to attack – with Phillips aware of the possibility of pirate attacks and getting his crew to rehearse their defense techniques…which involve water hoses only.

In a smoothly staged scene the tiny four-man skiff manages to attack the mammoth ship, and the Kalashnikov-wielding pirates take over the bridge and threaten Phillips. He manages to find ways to keep the pirates from finding the majority of his crew who are hiding in the dark depths of the engine room. Muse is as smart as Phillips and knows he is being conned, but when the crew manage to overpower him he agrees to leaving the ship in a tiny lifeboat with $300,000 from the ship’s safe instead of the millions he could make from holding the ship hostage.

But in a sneaky move Muse manages to grab Phillips and he finds himself stuck in the tiny orange lifeboat as it chugs across the ocean on its way back to Somalia. The film then switches in tone – from the expanse of the ocean it is now largely set inside the sweaty, claustrophobic, confines of the lifeboat – as things get tense and gritty. It is also rather amusingly incongruous as the tiny bright lifeboat, bobbing like a battered orange Reliant Robin in the waters as it is followed by three giant American warships.

As the title of Phillips’ source book implies, the climax comes with the arrival of a team of Navy SEALs (and since we know that Phillips wrote the book, we know he survives) and Captain Phillips wraps its tense and enthralling saga with a burst of action that nicely fits a film that at heart isn’t about guns and violence, but more a gripping character study about two different men.

As expected, Hanks is excellent as the everyman captain, and while the role is perhaps more straightforward than others he has played, he comes into his own as the story gets more and more tense, and he ends with a virtuoso emotional moment that is moving, intense and memorable. His performance is nicely matched by that of Barkhad Abdi, whose quiet intensity suits Muse perfectly.

Paul Greengrass is a talented and sure hand, and shoots with a real sense of the epic scale of the tanker and warships set alongside the gritty reality of the confines of the vessels. He and cinematographer Barry Ackroyd (they worked together on United 93) create a memorable film that while never brimming with bravura action, such as in Greengrass’s Bourne films, is a clever and memorable real-life drama.

Screenplay: Billy Ray, based on the book A Captain’s Duty: Somali Pirates, Navy SEALS, and Dangerous Days at Sea by Richard Phillips with Stephan Talty