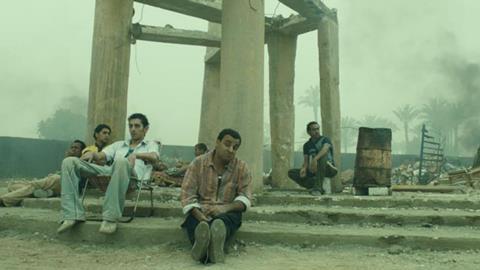 Nadine Khan’s dose of clever and entertaining Egyptian social drama Chaos, Disorder (Harag W’ Marag) is a gently subversive metaphor for the current state of the country and while it wears its heart well and truly on its filmic sleeve its strong performances and unusual backdrop set it apart from other recent Egyptian film output.

The film, which premiered at the Dubai International Film Festival, has the right amount of visual panache and original style to see it feature on the festival circuit, and could well also intrigue broadcasters.

Khan’s film is dubbed a ‘social fantasy’ with the filmmaker saying the idea was not a direct response to Egypt’s former dictatorship, but the story about a community seemingly cut-off from outside intervention and existing on arrivals of water and goods by truck, feels like it is a dramatic structure designed to reflect the woe of a country rather than a sheer flight of imagination.

In a dusty town in the middle of nowhere a football pitch and the irregular deliveries are what hold the interest of locals. Water, gas and food arrive by lorry – and lead to queues and often anger, with local shopkeeper Haj Sayed (Sabry Abdelmenem) getting the best choices.

Meanwhile his daughter Manal (Ayten Amer) is in a tense relationship with Zaki (Mohamed Farag), but Monir (Ramzi Lehner) hopes to win her over, with the two rivals only ultimately resorting to a football match as a means of sorting out who should woo her.

There is a classic debut film issue in that the characters are never quite fully drawn personalities and the plot sag at times as Khan is drawn into the – admittedly fascinating and amusing – dynamic of the town itself which exists in a sort of magical realism as it blends harsh realities with gentle oddness. The film’s strengths are in Assem Ali’s exemplary production design and Hassan Khan’s impressive music which acts as a link between the scenes.