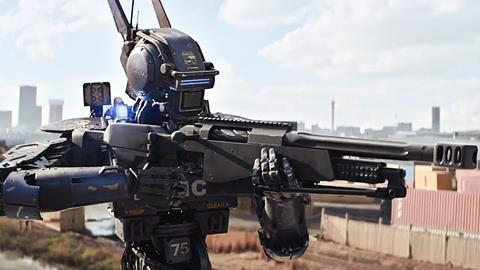 In Chappie, a great deal of technological innovation goes into telling the same story we’ve already seen many times. Johnny Five, Wall-E, Robocop and Big Hero 6’s Baymax now have a new roommate in cinema’s annals of unfeeling machines that discover what it means to be human, and perhaps one should be impressed that filmmaker Neill Blomkamp either doesn’t notice or care that his film’s titular robot treads such familiar thematic terrain.

Jackman and Weaver are dispiritingly one-note — he’s all buffoonish meathead villainy, she’s nothing but ice-queen contempt

For his third straight movie, Blomkamp (District 9, Elysium) has fashioned a brawny sci-fi spectacle which views humanity’s flaws with unflinching grimness. But despite his ambitions, Chappie is a bucket of bolts, Blomkamp’s desire to say meaningful things outdistancing his ability to say them compellingly.

Opening in the US and UK on March 6, Chappie will benefit from the star power of Hugh Jackman, Sigourney Weaver and Dev Patel. But biggest draws of this Sony release are probably Blomkamp and its robot-comes-alive premise, both of which should attract sci-fi fans. Needing to make the most of its two weeks in the marketplace before the arrival of Insurgent, Chappie should do solid business, although mediocre reviews may help put a ceiling on the film’s crossover potential.

Set in Johannesburg in 2016, Chappie introduces its familiar premise from the outset. As a way to combat rising crime, authorities have created an elite team of mechanised police officers, called Scouts, which have restored law and order. Their inventor, Deon (Patel), wants to take the next step, though, developing a program that will give the robots consciousness — an advancement that his boss, the all-business head of a weapons company (Weaver), shoots down. Undeterred, Deon reboots a damaged Scout, who is soon dubbed Chappie, with the ability to think, dream and learn.

That cursory overview of Chappie’s plot helps to avoid the weeds in which the film gets lost. Scripted by Blomkamp and his District 9 cowriter Terri Tatchell, Chappie is, on one level, a predictable journey of an innocent who discovers humanity’s harsh, peculiar ways. (It’s a familiar sci-fi/fantasy trope, as witnessed in Starman, E.T., The Iron Giant, even Meet Joe Black.) But Blomkamp invests a lot of emotion and ambition into the cliché, juggling several storylines that all tie back into Chappie’s unlikely coming-of-age. First, there’s the group of low-life gangsters, led by NINJA and ¥O-LANDI VI$$ER of the hip-hop collective Die Antwoord, who steal Chappie from Deon to use as a weapon, only to become the robot’s surrogate parents. Then, we have Vincent (Jackman), Deon’s buff co-worker (and a former soldier), who wants to replace the Scouts with a far more militarized police force, which requires him plotting to discredit Deon’s invention.

But rather than adding world-building complexity to Blomkamp’s vision, Chappie’s motley ensemble only clutters the narrative. (If the story wasn’t overstuffed enough, the gangsters also have to spend time worrying about a rival gang.) Perhaps not unsurprisingly, the film works best when it’s sticking to well-worn robot-out-of-water plot points.

Visually, Chappie is a nifty feat. Frequent Blomkamp collaborator Sharlto Copley played the robot sans costume alongside the other actors, and then an effects team created Chappie digitally in postproduction around him. As a result, Chappie feels remarkably lifelike, his human companions interacting with him persuasively. It’s expected that Chappie, who starts off with a toddler’s demeanour, will face obvious obstacles as he learns how to speak and behave, but Copley, whose voice has been treated to make it sound more robotic, brings a simple empathy to the character.

Much like District 9 and Elysium, Chappie seeks to be a warning about our failings as a society. And as is often the case with Blomkamp’s work, Chappie makes its points without subtlety, although that’s not to say that they can’t be affecting. Most intriguingly, the film observes as Chappie falls under the influence of his foul-mouthed, uncouth gangster buddies, and there’s a suggestion that bad behaviour isn’t something that’s passed down but, rather, learned through experience. The brainy, ineffectual Deon fights for the soul of Chappie — he insists that he’s Chappie’s maker, as if that gives him ownership of the robot — but because the thugs spend more time with him, the machine can’t help but take after them. (There’s also a stab at a critique of stereotypically macho male behaviour as Chappie learns how to shoot guns and be a “real man,” a posture that, in the world of Chappie, leads only to ignorance, violence and death.)

But these intellectual notions — along with tedious ruminations about the mystery of consciousness — are never explored with sufficient insight or curiosity. Instead, they’re just part of the hodgepodge, alongside an unimaginative Mad Max-like future of armed criminals with terrible haircuts and silly wardrobes meant to suggest how frightening the road ahead could be unless we change our ways. Whether it’s Weaver’s profits-before-people mentality or Chappie’s confusion about why humans break promises and do bad things, Chappie is a forthrightly earnest message movie whose conceits aren’t that fresh.

Plus, as Blomkamp demonstrated with his previous two films, Chappie is happy to put messages aside when it’s time for the third-act fireworks. In concert with composer Hans Zimmer, whose score is rousingly bombastic with shades of future-tech paranoia, and editors Julian Clarke and Mark Goldblatt, Blomkamp dishes out the action sequences near the end, pushing the spectacle and emotion to such extremes that it’s hard not to get swept up in the overkill.

But then one remembers the cartoonish performances. Jackman and Weaver are dispiritingly one-note — he’s all buffoonish meathead villainy, she’s nothing but ice-queen contempt — while the members of Die Antwoord play their thug characters as simplistic brutes whose eventual change of heart generates little pathos. Even the understated Patel gets lost in the machine of Blomkamp’s wild vision and threadbare ideas.