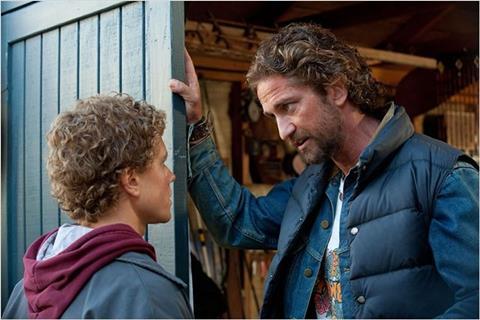 Inspirational sports biopic Chasing Mavericks delivers some awesome big wave surfing footage but some pretty corny drama in its telling of the true story of American surfing phenom Jay Moriarity. With Gerard Butler and newcomer Jonny Weston starring, this Fox/Walden Media outing might attract members of the surfing fraternity but seems unlikely to capture much of a non-boarding audience.

Cinematographer Bill Pope (The Matrix) emphasises the thunderous power of the giant slate gray waves and the toughness of the surfers who try to ride them.

Opening the film wide in North America this weekend, Fox will probably do well to match the mid-level domestic takes of recent wave-bound releases like Soul Surfer ($43.9m) and Blue Crush ($40.4m). Neither of those films did much in the international marketplace and Mavericks will probably only make a mark in territories where surfing is popular.

Moriarity was a teen from Northern California who in the 1990s became a rising star in the world of big wave surfing before his 2001 death in a diving accident. As written by Kario Salem (HBO’s Don King: Only in America) and directed by Curtis Hanson and Michael Apted (the latter taking over when the former fell ill towards the end of the shoot), the film focuses on the mid-teen Moriarity, played by Weston as a golden-curled youth with an optimistic disposition and a powerful determination.

Intent on tackling the mythic Mavericks surf break that in the right conditions appears near his Santa Cruz home, Jay persuades gruff but kindly surfing vet Frosty (Butler) to teach him the ins and outs of big wave riding. While he’s in training, Jay has to deal with his unhappy single mum (played by Elisabeth Shue), some beach side toughs and his blonde-tressed would-be girlfriend (Abigail Spencer, from Cowboys And Aliens)

As the Karate Kid-style tale unfolds through familiar situations and clichéd dialogue, Jay gets a surrogate dad to replace the one who left him and his mother and Frosty learns what it means to be a father to his own daughter. Butler is solid in his role, but Weston, who previously appeared in indie films including John Dies At The End, makes a bland hero.

By way of compensation, the surfing footage mostly avoids the usual graceful gliding over crystal blue waters. Instead, cinematographer Bill Pope (The Matrix) emphasises the thunderous power of the giant slate gray waves and the toughness of the surfers who try to ride them.