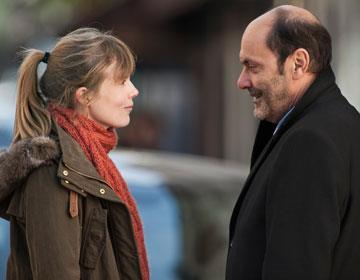 Pascal Bonitzer’s new comedie de moeurs is a pleasant, lightweight piece of entertainment, very French in spirit (and sitting in tone somewhere in between Jacques Rivette and Agnes Djaoui) but with its cast of seasoned, familiar, players such as Jean-Pierre Baccri, Isabelle Carre and Kristin Scott Thomas, should find receptive audiences in most francophone territories and available berths in most international film festivals.

Baccri, comfortable, ruffled and unshaven, looks just like the kind of academic who’d be harassed by any demand taking him out of routine while Scott Thomas fits in perfectly as the spouse in need of fresh excitement without taking the time to consider the consequences.

Downbeat Damien Hauer (Baccri), specialises in Chinese civilization, teaches businessmen how to handle their future partners in the Far East, because, as everyone knows, that is where the future lies. His theatre director wife Iva (Scott Thomas) stays out late every night preparing a Chekhov adaptation for the stage and their precocious bespectacled son Noe (Marin Orcand Tourres), 12 years old or so, watches his parents’ marriage going stale out of sheer routine.

Iva asks Damien to intervene with his father Sebastien (veteran Claude Rich having the time of his life), who is a high placed legal official, in favor of a Serbian woman who might be exiled from France after having divorced her French husband. But Damien, whose relationship with his egocentric father is rather cool, is loath to beg him for any favours. At the same time, he is asked by a young woman, Aurore (Carre) to attend his classes because of reasons that aren’t very clear.

Bonitzer takes these characters, adds a few supporting ones along the way, and concocts a Gallic chronicle surveying with an amused eye typical family manners and all their various ups and downs, which could - but are never allowed to - become either melodramatic or pedantic.

He has a natural talent to spin a perfectly plausible story and a gift of giving his characters fluid, intelligent dialogue, which should be no surprise because Bonitzer always chooses to deal with intellectuals who would speak in such a manner.

There is of course a touch of social satire, whether it deals with respectable homosexuality in the highest circles of society; with the generation gaps at several levels; with the treatment of immigrants at the hands of the French police and with some very appropriate reflections on the difference between dealing with a name on a piece of paper and facing the actual person bearing that name.

A study of characters in crisis, smart, often witty but never over-dramatised, the film benefits from a series of unforced, natural performances, which carry it through without a hitch almost to the final scenes. At this point the script, written by Bonitzer and Agnes de Sacy, after avoiding several the temptation to slip into clichés, seems to find no way out except into the obvious.

Baccri, comfortable, ruffled and unshaven, looks just like the kind of academic who’d be harassed by any demand taking him out of routine while Scott Thomas fits in perfectly as the spouse in need of fresh excitement without taking the time to consider the consequences. Carre contributes a luminous presence as a restless young woman with a weakness for the wrong partners, and there is even a walk-on guest appearance by well-known stage and film director Benoit Jacquot as one of Damien’s chess-playing cronies