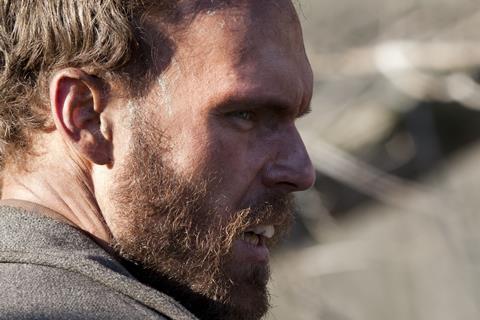 James Franco’s second literary adaptation this year, after his Cannes-bowing William Faulkner version As I Lay Dying, was always going to be a dark little number. Cormac McCarthy’s early novel Child Of God tells the tale of Lester ballard, a Tennessee backwoodsman who, rejected by society, descends into a semi-bestial state and ends up as a necrophiliac serial killer of women.

Franco pays homage to McCarthy’s source text, and the beauty of his prose, in some voice-over passages from the book voiced by unnamed narrators.

While remaining pretty faithful to the story, Franco somehow manages to inject a note of humour into the story of a man who comes across more as maladroit misfit than evil sociopath. The director also picks up on McCarthy’s note of lament for a wilderness lifestyle that was once a great American dream but has, by the time of the film’s 1950s setting, gone bad and been driven, literally, underground.

Oddly (given the subject matter), this title - which at the time of writing didn’t even have a sales agent - might even score some theatrical action in niche arthouse markets… it certainly has a better chance of reaching real paying audiences than the wilfully abstruse As I Lay Dying or the prolific Franco’s other 2013 directorial delivery, Interior. Leather Bar. If the film has one major drawback – apart from its depiction of a wild woodsman humping dead women – it’s some wobbly acting in the minor roles. Lead Scott Haze, on the other hand, who is alone on screen for much of the time, holds nothing back in his strong and sometimes alarmingly deranged performance as Lester.

Franco pays homage to McCarthy’s source text, and the beauty of his prose, in some voice-over passages from the book voiced by unnamed narrators, with a few others presented by way of intertitles: from these we learn that the Ballard family were always considered pariahs in Sevier County, Tennessee, and we also discover that Lester is an orphan who witnessed his father hang himself when he was nine or ten.

We first see him, already unwashed and unkempt, raging at locals who have gathered for the auction of his family farm; ejected from the property, he finds an abandoned cabin in the woods and moves in. Run-ins with the local sheriff, Fate (Blake Nelson) and his increasing incoherence (the film screened at Venice with English subtitles) seal Lester’s outsider status, which is presented as a vicious circle of rejection and introversion.

He’s a dimwit in some ways but one with a feral survival instinct, and he’s a sure shot with the rifle which he carries everywhere (his shooting prowess will win him three oversized furry animals at a fairground – which become his mute home companions). Lester’s the kind of shambling redneck who acts first and thinks later, shooting a cow just because it’s there, then cursing himself when it falls to its knees. There’s even a silent comedy quality to some of these wordless dumbass scenes at first, which are shot from a distance, and come across as Deliverance meets the Keystone Cops.

But while the child in Lester never quite gets driven out, the mood darkens in the second of the three chapters into which the film (like the book) is divided, when Lester comes across two lovers who have died in a suicide pact in a car in the woods. After having sex with the dead girl, he drags her body to his shack and installs her there, in a morbid twist on the ‘Lars and the Real Girl’ surrogate girlfriend trope.

This is only the start of Lester’s ‘depravity’ – but although he does shocking things, horror notes are avoided in a script that never loses sympathy with its protagonist, however repellent he becomes. Though stark and harsh, Lester’s life and its winter woodland setting has a certain rugged, uncompromising beauty too, brought out by Voros’ carefully composed camerawork, which makes extensive use of shallow depth of field to put Lester’s unique and lonely vision into sharp focus. And the soundtrack, with its jaunty bluegrass notes, is a clever intuition, keeping portentousness at arm’s length and playing up the element of wry allegory in this ‘reverse evolution’ story about a social reject’s descent from house-dweller to caveman.

Production companies: A Rabbit Bandini Production in association with Made In Filmland