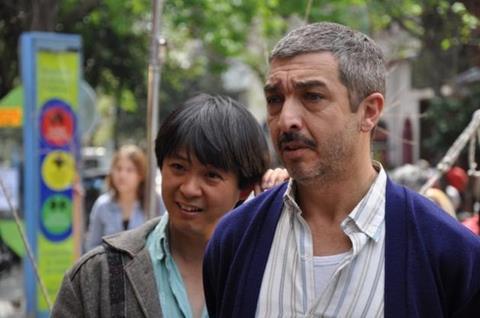 The thoroughly charming Latin American comedy drama Chinese Take-Away is a real delight – warm, amusing and delightfully structured, it is already a success in its native Argentina and should definitely be in consideration by savvy distributors and festivals on the lookout for a feel-good movie.

Chinese Take-Away is a real delight.

The film – released as A Chinese Tale (Un Cuento Chino) in Argentina by Disney – has already grossed more than $4.4 million in its home country, and recently made its European debut in Spain, breaking records for a Latin American release with a gross of $565,232 in its opening weekend.

The $1.2 million budgeted film is written and directed by Sebastian Borensztein - who made the 2005 film The Die Is Cast (La Suerte Esta Echada) – and who has crafted a gem of a film, driven by impressive central performances by Ricardo Darin and Huang Sheng Huang.

It opens quite wonderfully and simply doesn’t look back. On a beautiful lake in China a young man sits on an elegantly decked small boat and prepares to propose to the beautiful young woman sat with him. Suddenly the bizarrest thing happens – against all of the odds a cow drops out of the sky and lands on top of the woman.

The film then cuts to Buenos Aires where grumpy and cranky shopkeeper Roberto (Darin) is counting out the amount of screws he has been delivered. The order runs into hundreds, but he angrily works out he is a few short.

Living alone, he is a man of strict habits. He talks to himself while preparing his food; lies in bed and waits for his bedside clock to turn 11pm before turning off the light, and scours old newspapers for stories about strange and unexpected deaths, which he cuts out and pastes into an album.

Mari (Muriel Santa Ana), the sister of one of his few friends is in love with him, but Roberto is unable to commit to anything apart from his routine.

Things change when he meets Jun (Huang Sheng Huang). Sat by the airport runway (another of his odd habits is to picnic watching planes land at the main airport) he sees a young Chinese man thrown from a taxi. The man has no money, can’t speak Spanish, but has a Buenos Aires address written on his arm where his step father lives.

Grudgingly Roberto tries to help, but has no luck finding the step father and against his better instincts he ends letting Jun stay with him. Unable to understand each other they fumble through a shared existence as Roberto finds his ordered life thrown out of kilter in amusing and engaging ways.

Add to the mix Mari’s declaration of love to Roberto – she is a gentle, amused and kind woman who would never dream of putting overt pressure on him – and his whole settled world is turned upside down.

Interspersed through the film are small recreations of the newspaper stories of tragic deaths that Roberto clips out, with him imagining himself in the scenes, though this comes to a dramatic head when Jun admits that the story that Roberto finds most amusing – the cow falling from a plane smuggling cattle and landing on a woman – involved him.

Chinese Take-Away is a real delight, with the lead performances (Darin especially) all excellent. Its genial warmth and wry humour fit perfectly with its ‘odd couple’ storyline and it is a film likely to delight audiences as well as be in contention for award nominations.