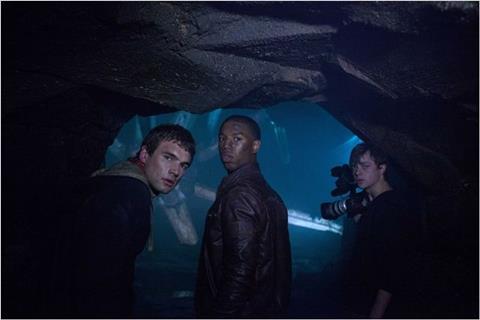 A low-fi genre hybrid that attempts to cash in on both the burgeoning trend of  “found footage” thrillers and superhero origin stories, Chronicle only scratches the surface of its junior-level Magneto narrative. Leaning on an increasingly ineffective patchwork blend of diegetic sources, the movie habitually opts for showy theatrics and set pieces over honest character investment, and ultimately fritters away a quite promising concept.

A solid marketing campaign and the movie’s teen-friendly Stateside rating should nonetheless power it to solid box office, while the aspirant and empowering nature of its narrative ought to give Chronicle additionally robust ancillary market value.

At a party, AV club-type Seattle high school outcast Andrew Detmer (Dane DeHaan) is corralled by his cousin Matt Garetty (Alex Russell) and outgoing student body president Steve Montgomery (Michael B. Jordan) into filming a strange discovery they’ve made: a hole in the ground emanating unusual sound and light. In the ensuing days and weeks, they all find themselves able to move objects with their minds.

As the trio exercises their telekinetic powers in prankish fashion, they prove a bit like a muscle, and become stronger. Soon they’re literally flying, soaring amongst jets and talking about possible weekend trips to Tibet. While Matt wants to lay down some ground rules about use of their skills in public and on people, however, Andrew begins to succumb to his darker, outsider nature, paving the way for a clash that will have consequences for an entire city.

Directed by Joshua Trank, from a story he concocted with scripter Max Landis, Chronicle exudes a certain unfussy technical polish. And it’s true that the bullying Andrew experiences, and the bleak portrait of his home life, are fairly well sketched. But given the thrown-together nature of their relationship (Steve is more acquaintance than friend, and while related by blood there is still some distance and tangled history between Andrew and Matt), there’s much more narrative meat on the bone than the movie digs into.

In its rush to get up in the air and showcase the air-quote cool elements of its super teens, Chronicle misses this opportunity to dig more deeply and substantively into Andrew’s profound resentments and pronounced social disconnections, and build something more special and truly unsettling.

Its downtown Seattle blowout provides a requisite amount of destruction, and is engaging enough on a surface level. But Chronicle otherwise feels oddly out of sequence, dropping in a scene where Andrew comes out of his shell by deploying his new skills in a school talent competition after the guys have learned to fly. There is no sense of building tension of momentum here, just a string of conceived bits.

Equally frustrating is the movie’s visual template. While the blend of spectacle and smaller effects work is mostly admirable and effective, the camerawork is a mess. Unlike Cloverfield, which deployed a similar device in having a character film the proceedings, Chronicle’s in-camera edits become increasingly arbitrary and aimless, cheaply leaping over pesky story problems with which it doesn’t wish to engage. Even less successful is an attempt to rope in another character, video blogger Casey (Ashley Hinshaw), who, like Andrew, is smitten with living life through a lens.

Given the thinly sketched and functional quality of the characters, Chronicle doesn’t leave (or require) much room for deep impression, but Jordan displays an ample amount of charisma as a young guy for whom relatively everything comes easily. Meanwhile, DeHaan, with the meatiest role, gives a very solid turn as the detached Andrew.

Screenplay: Max Landis, based on a story by Max Landis & Joshua Trank