Filmmaker Joanna Hogg pays tribute to producer Gayle Griffiths, who died Oct 23 at the age of 49 after a battle with cancer. Griffths produced two of Hogg’s features, Archipelago and Exhibition. 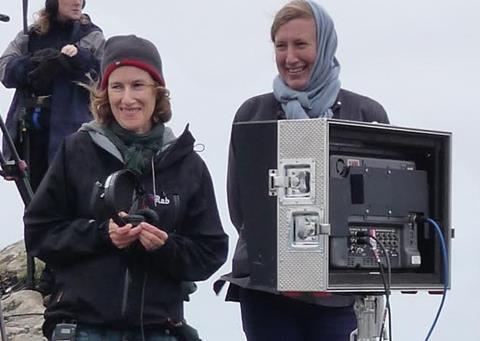 I am writing this is in one of my beloved Moleskin notebooks. Gayle gave me a stack of them in different colours after we finished shooting Exhibition. A perfect message to keep on writing. I haven’t used them all up yet but every time I write in one now, it will be tinged with sadness.

She was a rock and many times it was wonderful to lean on her. She gave me permission to dive headlong into difficult subject matter. No territory was too dark or too challenging for her. On the contrary she relished darkness – she would coax and cajole me to go further and deeper and always understand the time it takes to do this. We were mining together and any success for the films has to do with Gayle’s encouragement and tenacity. She physically produced the films out of me.

She courted me for many months before I agreed to collaborate with her on Archipelago. I know I tried to put her off  - mostly down to my ability to self sabotage - but she wouldn’t be dissuaded. She had seen my first film Unrelated and had responded to the story of a childless woman.

Although married, Gayle hadn’t had children herself and we had that in common. She was continually attracted to challenging subject matter and to filmmakers prepared to take risks. Emily Young with Kiss of Life, Josh Appignanesi with Song of Songs and Sally El Hosaini with My Brother The Devil, were all in their different ways pushing the cinematic form.

Of course any producer/director relationship is an intense one, especially during the making of a film. It wasn’t always easy but even when we fought we always managed to bounce back quickly. That robustness was a rare thing, I know it was, and it strengthened our working relationship. I want to say many things to Gayle. I hope she knew how special she was and how much, certainly in my own work, she supported and enabled me to travel deep into my own fears and emotions.

There is a lot I never knew about her. She was an intensely private person who preferred not to reveal much about her own life. I respected this and our relationship was formed more around the films we were making together and the subject matter we were grappling with. I got to know and understand her by her response to the ideas and the emotional terrain being discovered in the films. Around the making of Archipelago the subject of family and its complexities were discussed in depth and some of our conversations fed into my writing.

I wish Gayle could hear some of the wonderful things being said by friends and colleagues. Of course she would have dismissed them but for someone as modest and private as Gayle, she made a huge impact on the people she met and worked with.

I don’t only want to talk only about Gayle the film producer. She was someone for whom compassion was second nature. I observed a kindness and depth of feeling for those she perceived in great need – often vulnerable people. An elderly neighbour, I suspect there were many of them, who she would visit and take care of. She never lost this generosity of spirit even when she was in need of support herself during her illness. She made me question my own capacity to support others in need and her depth of feeling and humanity always moved me.

Abiding memories of the free spirited Gayle – her daily swims in the sea when we were filming Archipelago on Tresco in the Isles of Scilly. She admitted she was afraid of the water but nevertheless would take the plunge every day. She was physically courageous and this bravery extended into her attitude to producing – there was no subject matter or territory too difficult and she positively glowed when faced with a challenge.

As a producer Gayle was gifted with an honesty and straight forwardness that was disarming to many who worked with her. She also knew she had a challenge on her hands and that the future of film wasn’t a bright one. She was a lone force in an industry that is changing in so many negative ways. I want to shout out on her behalf, especially to the producers out there. Don’t just think about box office or the audience, or worry when you don’t understand something in a screenplay.

The way we can honour Gayle and her legacy, is to challenge ourselves to make work which goes deep into uncomfortable and challenging terrain and will above all stand the test of time. I hope to continue making films Gayle would be proud of. To better myself, push myself further, but I will miss her egging me on.