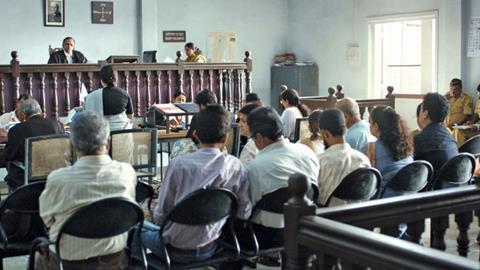 First-time feature director Chaitanya Tamhane uses the trial of a protest singer in a Mumbai court to dissect the state of justice, caste and civil society in contemporary India. It’s a rich, nuanced film, more social fresco than courtroom drama, and a deserved winner both of the Horizons section prize and the Luigi De Laurentiis debut film award at this year’s Venice festival.

There’s no soundtrack music, just the rustling of lawyers’ briefs and the keyboard tapping of the court stenographer in a film that teaches us that in real life, a campaigning civil rights speech can be interrupted by a janitor who’s come to install a fan.

The film’s style is as striking as its branching narrative structure. There are next to no head-and-shoulder close-ups, but a series of long and medium shots captured with the kind of crisp deep focus that today’s digital cameras allow. The result reminds us that in India no man is an island, but part of a busy, often distracted milieu in which the courtroom spectator nodding off in the corner is as relevant a detail as the prosecutor’s summing up.

Its poised, auteurish approach will make Court a standalone curio for potential distributors, as it doesn’t easily fit into any recent style or genre of south Asian indie cinema. At the same time, Court is deeply rooted in the subcontinent’s society and politics – but although those not up on the intricacies of caste politics, Hindi nationalism and civil liberties in prime minister Narendra Modi’s India may miss certain nuances, there are enough layers left for the rest of us. The points the film makes about how states filter their war on dissent through apparently democratic civic institutions apply worldwide, not just to India.

At first, it looks like the story will dwell exclusively on the state’s trumped-up charges against ‘people’s poet’ Naryan Kamble (Sathidar), a sort of dignified, elderly protest rapper whose inflammatory lyrics are linked by police to the suicide of a local sewer worker (in India, even the verbal abetting of suicide is a crime). Producer Vivek Gomber plays Kamble’s well-educated, Westernised defence lawyer, Vinay Vora, who seems to specialise in civil liberties cases, and whose argument rests mainly on a fact that becomes glaringly obvious fairly early on: the sewer worker didn’t commit suicide at all, but was overcome by poisonous gases in the course of his work due to a lack of even the most basic protective gear.

Rather than focus on the courtroom drama, Tamhane makes the point that in real courtrooms, there is surprisingly little drama: lives are changed and rights are upheld or denied by judges and advocates who are thinking of lunch, or whether they’re going to make it to school in time to pick up the kids. Arcane, abstract rules and personal whims play their part too – as when the cantankerous trial judge, Sadavarte (Pradeep Joshi), adjourns one case by over a month because he doesn’t like the way the defendant is dressed. In the slots around the multiple sessions of the Kamble trial other cases unfold, involving a stolen watch, or a dock-full of passengers who were caught travelling in a train compartment reserved for the disabled.

And rather than follow Kamble – a veteran activist who has obviously been through all this before and fully expects to again – the narrative drifts off to chart the home life of defence lawyer Vora and later his state-appointed prosecution counterpart, Nutan (Geetanjali Kulkarni). These scenes act as a corrective to easy goodie/baddie judgements: Vora lives the comfortable life of the Mumbai elite, buying wine in a supermarket that has a whole section devoted just to salad dressings, going to jazz clubs and expecting to be waited on hand and foot by his mother when he returns home. From a much more modest background, Nutan is expected to pick up her son from school, go shopping and cook for her TV-watching husband and kids when she gets back from her day in court.

Caste fault lines are revealed in ways that may elude Western audiences – the play of surnames, for example, will resonate for locals – while shifts between English, Marathi, Hindi and Gujarati are used to score points and declare allegiance, with English by no means being the trump card (a critique of Hindu nationalism comes to the surface in several scenes, notably one set in a comedy theatre, where audiences applaud a Maratha father’s racist dismissal of his daughter’s suitor).

There’s no soundtrack music, just the rustling of lawyers’ briefs and the keyboard tapping of the court stenographer in a film that teaches us that in real life, a campaigning civil rights speech can be interrupted by a janitor who’s come to install a fan. There’s no such thing as a hero’s journey in a distracted world, Tamhane seems to be saying. All we can do is chip away, in the full knowledge that we’re a part of the system we’re chipping away at.