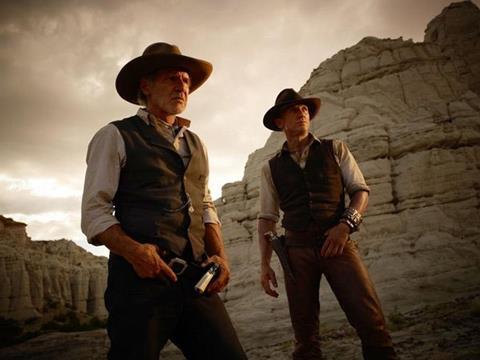 A genre mash-up featuring the enjoyably craggy star pairing of Daniel Craig and Harrison Ford, Cowboys & Aliens looks for a while as if it might live up to the quirky promise of its title. But by the time one side (three guesses) emerges victorious, this straight-faced Western/sci-fi cross, corralled by Iron Man franchise director Jon Favreau, feels like two fairly generic movies that don’t quite add to up to more than the sum of their parts.

Craig pulls off the move from suave super-spy to enigmatic outlaw reasonably well and Ford is nicely cast as the battle-hardened Colonel.

The Universal/DreamWorks/Imagine outing reportedly went down well at the recent Comic-Con fanboy convention and it will certainly be able to count on that core audience when it opens in North America through Universal on July 29. Less certain is whether it will be able to pull mainstream audiences away from competing releases like Captain America and Rise Of The Planet of the Apes.

On its August/September international rollout through Paramount the film may suffer because of its Western tag but should benefit from the global reputations of both Craig (thanks to his recent James Bond missions) and Ford (who went down particularly well outside the US in his 2008 Indiana Jones revival).

Five screenwriters - the Star Trek reboot team of Roberto Orci and Alex Kurtzman, Lost’s Damon Lindelof and Iron Man scribes Mark Fergus and Hawk Ostby - were put to work adapting the 2006 Platinum Studios graphic novel on which the film is based.

What they delivered is for the most part a Clint Eastwood-inspired Western with Craig’s Jake Lonergan as the gun slinging anti-hero. After waking up in the desert with a mysterious shackle on his arm but without his memory, Jake stumbles into the half-deserted town of Absolution, which is ruled by iron-fisted rancher Colonel Dolarhyde (Ford).

Before the protagonists can really lock horns, however, Absolution is attacked by flying ships that snatch half the townspeople off the streets. With his memory beginning to return, Jake joins forces with Dolarhyde and the remaining townsfolk on a mission to rescue the abductees from the evil aliens.

The film rambles a bit through its middle hour, with just enough emotional content to keep things going: Jake is haunted by dreams of one mysterious woman and closely followed by another (played by Olivia Wilde, from TV’s House MD) while the Colonel struggles to be a father figure to his lazy son (There Will Be Blood’s Paul Dano) and his Indian right-hand man (Adam Beach, from Flags Of Our Fathers).

The initial alien attacks are exciting enough and there’s some good ground-to-air action as the space fighters strafe the confused cowboys. The aliens themselves - crosses between the title characters of the Alien films and District 9’s ‘shrimps’ - only start to appear later in the action.

The big final act battle - in which Apache Indians join forces with their traditional rivals against the alien invaders - pits the human’s bravery and late nineteenth century weapons against the aliens’ size and technology. But the action isn’t particularly well staged and the effects (achieved on a reported $100m budget) aren’t always up to the standards of the biggest summer action epics.

Craig pulls off the move from suave super-spy to enigmatic outlaw reasonably well and Ford is nicely cast as the battle-hardened Colonel. The depth of the supporting cast gives the film an added dimension - Keith Carradine, Iron Man 2’s Sam Rockwell and The Shawshank Redemption’s Clancy Brown all do enjoyable turns - and cinematographer Matthew Libatique, who recently shot Black Swan as well as the Iron Man films, makes attractive use of the New Mexico locations.