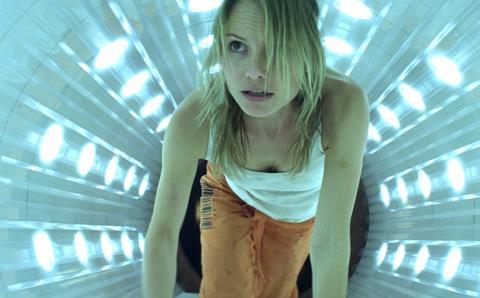 Aussie sci-fi/horror thriller Crawlspace may well be so-very familiar, but director Justin Dix still manages to deliver a solid and exciting bit of genre entertainment that will keep fans happy as it ticks all the right boxes, and certainly punches well above its weight.

Crawlspace, which screened recently at Sitges and Screamfest genre festivals and is set for some limited theatrical releases, is short on pretention but strong on style, gore, gunplay and genre fun. The screenplay dabbles with familiar conspiracy themes, but at heart it is a blend of Aliens and Resident Evil, with a dash of Scanners and Event Horizon thrown in for good measure.

Amber Clayton, who starred in TV series Three Rivers, makes for an appealing lead as ‘Eve’, a woman with little memory, a recent scar from surgery on her head and a dark past, who wakes in a crawlspace tunnel at Pine Gap, a top secret research facility in the remote Australian outback. Things have gone badly wrong there, and a special ops army group is being helicoptered in to take care of the mess.

Before long the machine-gun toting soldiers are getting wiped out – either by prisoners with psychic powers or by mutated beasties – but when the squad leader (Ditch Davey) comes across Eve in the tunnels things change. He is convinced she is his wife and is determined to try and save her. Cue plenty of gun-play and general nastiness in the tunnels as the squad (well, what is left of them) try and get to the bottom of what the facility really did as well as trying to save their own lives.

Justin Dix – who also co-scripted and handled the atmospheric production design – keeps things pacy and moody, and while there a few time-outs for the soldiers to catch their breath and engage in some exposition, he smartly favours gunplay and gore over trying to make the standard sci-fi plot stand-up. Crawlspace is a well-made and modestly enjoyable genre number. Divertingly silly.