Cutie And The Boxer 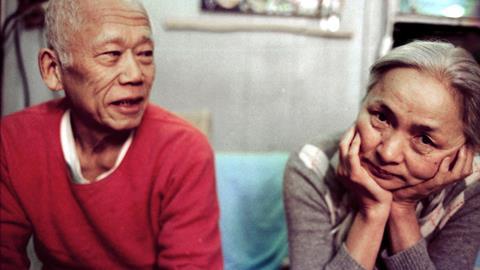 An affectionate portrait of a long marriage that doubles as a trenchant examination of the realities facing the working artist, Cutie And The Boxer is equally inspiring, funny and wise. On its surface, this fly-on-the-wall documentary simply shines a spotlight on adorable husband and wife artists Ushio and Noriko Shinohara, but filmmaker Zachary Heinzerling masterfully plumbs depths to give us a greater understanding of their marriage in relationship to the different art they create.

Ultimately, the movie celebrates different kinds of commitment, whether it be to the perils of being an artist or to the uncertainty of marriage. Neither pursuit is for the feint of heart, but as Cutie And The Boxer lovingly argues, each has immense rewards.

Premiering at Sundance, where it won the directing prize in the US Documentary Competition, and now screening as part of True/False, Cutie And The Boxer will be distributed in North America and France by RADiUS-TWC, a division of the Weinstein Company. Art lovers familiar with the Shinoharas will no doubt be interested in the material, but the movie’s ultimately uplifting tone could help it cross over with upscale art houses and on-demand cable services.

Making his feature directorial debut, Heinzerling (who also shot and co-produced the film) focuses first on Ushio, a Japanese artist who as the film begins is celebrating his 80th birthday. Nicknamed “Gyu-chan,” Ushio moved to New York City in the late ‘60s, gaining acclaim (but little commercial success) for his bold work, which included making motorcycle sculptures out of discarded items like cardboard and doing so-called “boxing” paintings, which consist of him punching a large canvas with boxing gloves dabbed in paint.

Initially, it seems that Ushio’s career will be the main emphasis of Cutie And The Boxer, but slowly Heinzerling reveals his film to be a study of Ushio and Noriko, who is more than 20 years younger than Ushio and moved to New York dreaming of becoming an artist herself before falling in love with this charismatic, talented man. Over the course of the film’s running time, we learn how Noriko’s gift for charmingly low-key illustrated storytelling has been overwhelmed by Ushio’s ambition, which intimidated her enough to give up on her dreams, instead becoming a wife and mother.

Utilizing Noriko’s autobiographical drawings, which the documentary animates with quiet simplicity, Cutie And The Boxer gives us a sense of how she has been the strong foundation for a marriage approaching 40 years. But rather than making her a martyr, the film reveals this couple’s dynamic to be far more nuanced. Ushio may have been more driven — not to mention problematic because of a bout with alcoholism — but Noriko is hardly blameless, allowing her husband’s desires to supersede her own. And yet, as in all enduring love affairs, there seems to be a shared secret language — a playful, sweet give-and-take that’s almost subliminal — that suggests a deep connection between them that may never be fully appreciated by others.

Throughout, Heinzerling’s camera is patient and attentive, letting little domestic scenes play out without forcing any grand drama into the proceedings. Likewise, the film shows us snippets of the struggle that Ushio must endure to try to get his work sold. (The anxiety of having to make rent payments and impress gallery owners lingers like a dull ache over everything we observe.) And yet despite the sobering realities of this couple’s chosen profession, Cutie And The Boxer is actually quite light-hearted and joyous. Ultimately, the movie celebrates different kinds of commitment, whether it be to the perils of being an artist or to the uncertainty of marriage. Neither pursuit is for the feint of heart, but as Cutie And The Boxer lovingly argues, each has immense rewards.