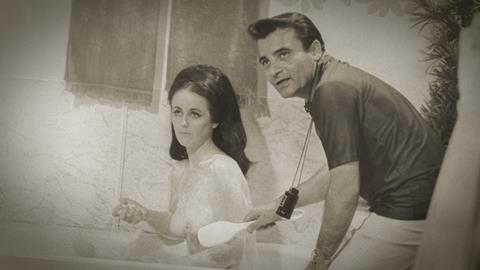 Dad Made Dirty Movies does a great job in capturing the feel of the era.

During the Communist take-over of Bulgaria after the war, Aspostolof found his way to America via Turkey and France, eventually claiming asylum in the 1940s. In 1957 he managed to produce an anti-Communist film titled Journey To Freedom, loosely based on his own life. On that film he worked with cinematographer William C Thompson and actor Tor Johnson, later to find fame – or at least notoriety – with oddball director Ed Wood.

The advent of hard core pornography at the cinema – such as Deep Throat – essentially killed off the oddly innocent ‘nudie’ films and Apostolof found his funding system drying up. He made an attempt to crack the comedy-action market with caper film Hot Ice (1978), but found Hollywood no longer interested in him.

Dad Made Dirty Movies does a great job in capturing the feel of the era, with plenty of black-and-white clips of topless women (he favoured using strippers and dancers for his films) bouncing up and down in his largely naive and inept movies. But all those involved – from his children through to performers such as Nadeja Bobrev – recall the time with a certain affection, and despite their simplistic sexism, bad acting and poor production values the films make for a fascinating slice of alternate life in the 1960s and ‘70s.

As the video sleeve for the film promised: “”A bizarre bouillabaisse, blending beautiful naked ZOMBIE GIRLS, VAMPIRES, VIXENS, WANTON WEREWOLVES and TORTURED TEENS in bondage…” One for cult film fans.