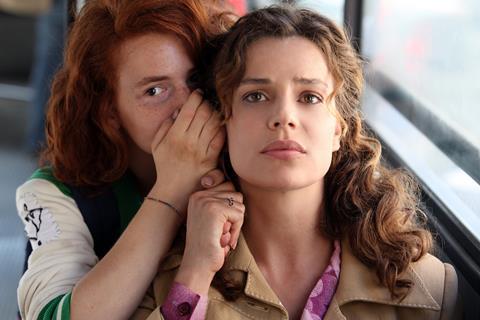 There’s no doubting the bravery of Davide, the androgynous 14-year-old Sicilian boy whose story forms the centrepiece of Sebastiano Riso’s debut. Based on the true early life story of a leading Italian drag queen – a connection that in this final edit is alluded to only in one blink-and-you-miss-it final credit sequence – the film charts the conflicted teen’s discovery, in downtown Catania, of a supportive alternative family of gender-flexible chancers, hustlers and performers, when he runs away from his repressive Catholic home.

The film will rouse some audience interest at home in Italy, where the debate on freedom of sexual and gender expression still has some ground to cover, and will likely be stirred, rather than patronised, by Midnight’s soft-shoe approach and simplistic ‘prejudice is bad’ message.

If only the script and direction had the same sense of purpose. In a film that doesn’t want its hero, or audience, to suffer too much, and goes easy even on a paedophile pimp, Darker Than Midnight (Piu buio di mezzanotte) comes across as an early Gus Van Sant film sanitised for a young teen audience. It’s also surprisingly flatline in dramatic terms, given the material.

Released by Cinecitta Luce on May 15, after its Cannes Critics’ Week debut, the film will nevertheless rouse some audience interest at home in Italy, where the debate on freedom of sexual and gender expression still has some ground to cover, and will likely be stirred, rather than patronised, by Midnight’s soft-shoe approach and simplistic ‘prejudice is bad’ message. Elsewhere, this is not likely to set the pulse racing, despite the admittedly striking poster image of flame-haired lead Davide Capone, who has one of those borderline boy-girl faces that compel the attention.

Here he meets up with La Rettore (Gulizia), a Depeche-Modish fellow androgyne who introduces Davide to his variegated group of friends – including a poor-man’s-Marilyn-Monroe transvestite hooker (Gimelli Morosini in one of the film’s more committed performances).

A gang-of-friends support network is duly formed, while a series of flashbacks fills in Davide’s family backstory, showing him to be the victim of an authoritarian father (Amato), a conformist enraged by his long-haired, effeminate son’s ‘shameful’ failure to be a good, skirt-chasing Italian son, and a fragile mother – both derivative characters, both paying lip service to the orthodoxy that hey, in the end, everyone’s a victim.

When Davide falls for a moody local rent-boy (Raineri), he comes into contact with the latter’s pimp (Delbono), a white-suited melancholic whose entirely consensual ‘rape’ of Davide is an excuse for the camera to pan pruriently around the room. The fact that Davide’s father also wears a white suit in one key scene is presumably supposed to make us reflect, in pop-Freudian fashion, on how repressive, homophobic fathers are also kind of pimps in their way.