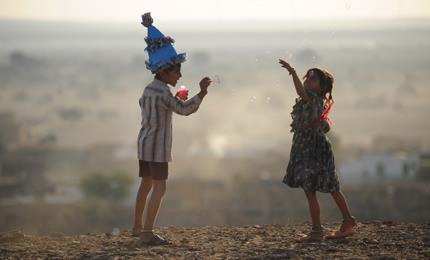 Tannishtha Chatterjee’s radiant performance stands at the centre of Dekh Indian Circus), a poignant story of a desperately poor family’s efforts to take their children to the circus.

The film registers a quiet outrage at the social inequality and lack of empathy that makes the family’s journey so difficult.

The second feature (and first Hindi film) by up-and-coming director Mangesh Hadawale, whose Marathi-language Tingya won numerous awards in India, Dekh Indian Circus is a simple story well told, that will appeal to a broad audience. The film screened at the Busan International Film Festival.

Set against the backdrop of a regional election, the plot centres around Karajo (Chatterjee), who promises to take her daughter Panni (Oza) and son Ghumroo (Rathore) to a travelling circus that has arrived in a neighbouring town.

Ordinarily unable to afford such a luxury, they plan to use some money given to day labourer husband Jethu (Peepli Live star Siddiqui) at a vote-buying political rally. However when he also accepts a mobile phone from a rival candidate, thugs from the first party beat him up and take both the phone and his money. Unable to face her heartbroken daughter, Karajo resolves to take the two children herself, using any means possible.

Chatterjee (Brick Lane), who appears opposite Martin Sheen in the upcoming Bhopal: Prayer for Rain, exhibits a wide range of emotions in a charismatic and heartfelt performance. The film is as much about family dynamics and sacrifice as it is about reaching their goal, and this sense Chatterjee’s acting holds the film together. Rathore and Oza as the son and daughter are also outstanding.

Although the film contains a few musical sequences, Hadawale keeps the focus on this story and proves himself to be adept at creating drama out of simple exchanges. Simultaneously, the film registers a quiet outrage at the social inequality and lack of empathy that makes the family’s journey so difficult.