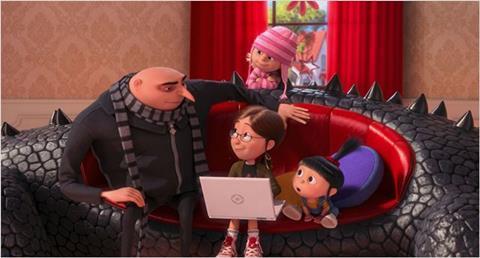 A spot-on animated sequel that delivers the right balance of laughs and sentimentality, the resolutely charming Despicable Me 2 might well lack the sheer sense of originality of the original film but it more than makes up with its breezy and funny story as the eternally-grumpy Gru gets the chance to prove he has hero qualities alongside his rather unconventional parenting skills.

The 3-D animation is bright and breezy, with lots of fun to be had both in the antics of the minions and Gru’s obsession with over-the-top weaponry.

And if the first film was all about a baddie discovering his inner warmth as he was forced to look after three young girls, then this time round romance is in the air as the ‘despicable’ one looks to extend his oddball family. Along with Monsters University it seems likely that Despicable Me 2 will be one of the family summer blockbusters as the fan base for Gru’s hilarious yellow miniature minions gets bigger and bigger.

From serious moon-stealing super-villain at the start of 2010’s hit Despicable Me, the sinister-looking Gru (again wonderfully voiced by Steve Carell) has now embraced his life as adopted father of three super-charming young girls, Margo (Miranda Cosgrove), Edith (Dana Gaier) and the supremely adorable Agnes (Elsie Fisher), and as the film opens even dresses up as a fairy princess to keep Edith happy at her birthday party.

Gru has even gone straight (he and the minions produce inedible jelly in his house’s former super-villain lair), but the mysterious Anti Villain League has other ideas. Secret agent Lucy Wilde (sweetly voiced by Kristen Wiig) is sent to recruit him, with the twosome teaming to pose as shop owners in a shopping mall where the AVL think a stolen secret serum, that can cause monstrous mutations,may be located.

Their investigation also provides an opportunity to get closer (and for Gru to reveal his inner romantic) and alongside this there are also expanded opportunities for the yellow-skinned babbling minions (who have their own feature film in the pipeline) to also get plenty of screen time as a whole bunch of them are kidnapped by the evil mastermind who is planning to unleash the deadly serum on humanity.

The film smartly moves at a good old pace, and while never overly original, the script by Cinco Paul and Ken Daurio offers plenty of genuinely funny moments, and in the delightful youngster Agnes they have created one of the most adorable animated children for some time. The story is perhaps more diluted than the more focused Despicable Me, the character development is spot on, touching at times and always has a gag ready to pounce.

The 3-D animation is bright and breezy, with lots of fun to be had both in the antics of the minions and Gru’s obsession with over-the-top weaponry. To an extent, though, it is the wacky minions that always deliver the big laughs – and their musical cover variations of I Swear and YMCA are genuinely funny moments – with Steve Carell’s often quite subtle delivery of the witty lines at times almost lost in amidst the more slapstick mayhem of the minions.