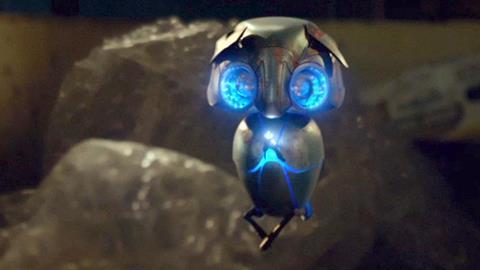 Feeling like a cut-price mash-up of ET, Stand By Me and Super 8, sci-fi adventure Earth To Echo has some digital-age visual style but nothing like the emotional depth of its coming-of-age movie models. A handful of decent visual effects shots isn’t likely to make up for the little known cast and flimsy drama when this Relativity Media presentation hits the marketplace.

While the plot leads to a few moments that briefly test the bonds between the three friends there isn’t enough real peril to produce a significant dramatic arc.

Relativity is optimistically giving the film a wide North American release on July 2, at the start of the Independence Day holiday weekend, but home-viewing outlets would seem to offer more potential. Independents that have bought rights from Relativity for international markets may do better by going straight to home platforms.

Directed and scripted respectively by feature first-timers David Green and Henry Gayden, the film turns around Alex (Teo Halm),Tuck (rapper/actor Brian ‘Astro’ Bradley) and Munch (Reese Hartwig, from The Muppets Movie), teen best friends who are about to be broken up because of the demolition of their suburban neighbourhood. Strange phone messages lead the trio to Echo, a tiny alien creature stranded on Earth who the boys - plus potential romantic interest Emma (Ella Wahlestedt, from TV’s Army Wives) - resolve to help.

Related by what is supposed to be the boys’ own video footage of the adventure, the action is frenetic and sometimes hard to follow. The fast-cut shooting style reflects the visual literacy of modern teens but it sometimes feels forced and it’s likely to be wearing for post-teen audiences.

While the plot leads to a few moments that briefly test the bonds between the three friends there isn’t enough real peril to produce a significant dramatic arc.

And though Echo - who resembles a robot owl - is fairly cute, he isn’t on screen much and his alien powers are mostly illustrated through pretty basic effects work. Only in the climactic appearance of Echo’s ship do the effects have anything like a wow factor.