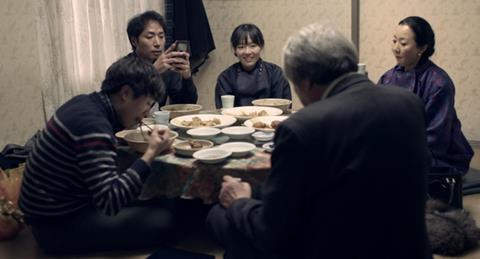 Korean films and television dramas dealing with the trials and tribulations of family life can often be a dramatic affair, but Kim Dae-hwan’s impressive and dispassionate debut feature tackles such issues with a sensible sense of restraint through its rich but subtle aesthetic as it follows a family on the verge of turmoil after the father suddenly announces he wants a divorce.

Kim Bo-ram’s cinematography plays an instrumental part in differentiating the feature from the conventional melodrama as they exploit the picturesque snow-filled landscape to help give the film a more contemplative tone.

Premiering in the New Currents section at the Busan International Film Festival (BIFF), Kim’s strong craftsmanship should leave a lasting impression on festival programmers seeking a strong Korean feature from this year’s Busan lineup. In terms of its local potential, the feature which was produced while Kim was attending Dankook University’s Graduate School of Cinematic Content – also responsible for last year’s 10 Minutes that also travelled well - is also set to receive adequate exposure ahead of a theatrical release because the institution is supported by one of Korea’s main distributors Lotte Entertainment that also owns a cinema chain.

Taking place in the county of Cheorwon, a daughter-in-law and two sons travel to attend their father’s retirement ceremony, but at a family dinner the father tells his family without explaining why that he’s decided he wants a divorce. The shocked wife is speechless and leaves the family in confusion, but with heavy snow preventing any of them from leaving, they are forced to stay with each other and attempt to work through the underlying issues that begin to arise.

Unlike The Dinner that closed last year’s BIFF, Kim stays well clear of filling the narrative with references and subplots that attempt to address the conflicts and issues associated with family troubles, and instead intelligently uses Park Jin-soo’s script to focus on providing a more complex family portrait.

Kim Bo-ram’s cinematography plays an instrumental part in differentiating the feature from the conventional melodrama as they exploit the picturesque snow-filled landscape to help give the film a more contemplative tone.

The snow too is a useful and effective point of interaction for the central couple as tensions finally boil over between the two as they throw snow balls at each other, but in a manner that serves the narrative well maintaining that subtle touch without falling into the trap of making it overly dramatic. All of which is further complimented by a delicate and almost absent but effective score, which doesn’t seek to pull on the heartstrings.

In terms of the leads, Moon Chang-kil (Steel Cold Winter) expertly captures the father’s understated character that spends much time in silence keeping himself busy with work around the home. Other roles such as the daughter in-law played by Lee Sang-hee who remains dedicated to supporting the family are generally convincing.

Without suitable closure or a climatic scene that reveals the family’s hidden troubles, it may disappoint some viewers, but those seeking a more absorbing tale of family meltdown that refuses to conform to the traditions of the melodrama are more likely to embrace the film.