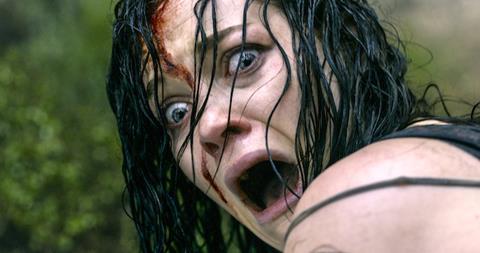 The process of remaking every horror film with a high name-brand recognition factor continues in Evil Dead, a cover version of the video nasty era classic The Evil Dead by Uruguayan writer-director Fede Alvarez , who, like original director Sam Raimi in 1982, has previously only made short films.

This redo is more splattery and visceral than most recent horror, but isn’t terribly scary.

The independently-made, extremely low-budget original, which called itself ‘the ultimate experience in gruelling terror’ in its own end credits, was a rough and ready horror comic with a ferocious attack and a streak of sick humour, and set Raimi off on a wayward career which has recently extended to the mainstream likes of three Spider-Man films and Oz the Great and Powerful.  Evil Dead premiered at SXSW.

Produced by Raimi’s Ghost House company at Sony TriStar and filmed in Michigan and New Zealand, Alvarez’s version has the benefit of studio funding, an attractive and professional young cast and gruesome special effects well in advance of those available to the original team.  Like Marcus Nispel’s remake of The Texas Chain Saw Massacre – but unlike recent ham-fisted reduxes of everything from The Amityville Horror and The Hitcher to The Stepfather and A Nightmare on Elm Street -  it’s a solid, effective, even imaginative job mounted with thought and care, delivering enough grand guignol shocks to satisfy a contemporary multiplex crowd on a weekend night, if not to fulfill its poster promise ‘the most terrifying film you will ever see’.

After an unneeded prologue in which the possessed daughter of a professor who has unwisely summoned demons in the Michigan woods is captured, ranted at and burned by locals who then disappear from the film, Alvarez quite closely follows the premise and plot of the original – though his script adds more tensions within the group of young folks who spend the weekend at a family cabin in the woods, and knowingly plays around with which characters will take the roles and suffer the fates of their predecessors.

David (Shiloh Fernandez), a mechanic, is getting back together with his long-time friends Eric (Lou Taylor Pucci), a schoolteacher, and Olivia (Jessica Lucas), a nurse, bringing along his new girlfriend Natalie (Elizabeth Blackmore).  This time, in parallel with the recent cabin-in-the-woods horror Resolution, the purpose of the weekend retreat is to help David’s sister Mia (Jane Levy) go cold turkey and get off heroin.

Robert McKee-like lip-service is paid to backstory and character arcs as David is criticised for abandoning his sister with their recently-deceased demented mother and he tries to make up for his failings by going to great lengths during the crisis which kick-starts when Eric unwisely reads aloud words from a book found in the basement and the friends are, in turn, possessed by demons who either gruesomely assault the uninfected or force the normals to wreak enormous damage on them.

Mia, naturally, is first to be possessed, after sexual assault by animated vines, but the film only briefly toys with the notion that her friends mistake her satanic activities for symptoms of withdrawal.

Following the Chekhov dictum, early shots establish the implements (shotgun, nailgun, chainsaw, electric carving knife, etc) which will be employed in the atrocities … and then they are deployed to wince-making, crowd-pleasing effect.  Illustrations in the book also signpost horrors to come, including an Apocalyptic rain of blood that drenches the climax  in even more gore than before.

Despite the character-building business, there’s little empathy with these victims.  The horrors which get the most audience reaction are those that hit closest to home – Mia deliberately scalding herself in the shower, or parting her tongue by licking a knife blade – rather than those that go to ridiculous extremes as folks remove their own limbs or stagger on despite multiple mutilations.

In Evil Dead II (1987) and the prologue of Army of Darkness (1991), Raimi already delivered remakes of The Evil Dead which play up the comedy, relying on the pratfall skills of series star Bruce Campbell (who features very briefly here, in a post-credits sting).  Alvarez drops most of the humour – beyond the ridiculousness of some situations, like Eric foolishly reciting those cursed names out loud – and plays up the cruelty, replacing the childish sing-song taunts of 1982 (‘we’re gonna get you’) with Exorcist-type blunt nastiness (‘your little sister is being raped in hell’).

Also missing are the quiet, surreal, strange moments which established an occult atmosphere – a few of the series’ trademark demon-POV-rushing-through-the-woods shots remain.  This redo is more splattery and visceral than most recent horror, but isn’t terribly scary. Within its self-imposed limits as a remake, this is perfectly satisfactory, but the jury is still out on whether Alvarez can deliver on the promise of his shorts with more original work.

Screenplay: Fede Alvarez, Rodo Sayagues, based on the The Evil Dead scripted by Sam Raimi