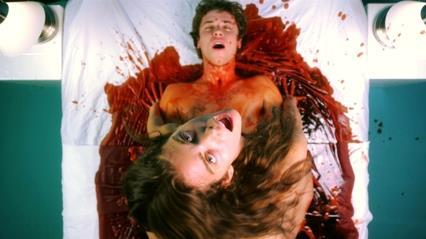 Edgy, bloody and defiantly controversial, Excision has the gore quota to appeal to hardcore genre fans and a strong cast – including 90210’s AnnaLynne McCord and cult icons John Waters and Malcolm McDowell – to pique the interest of those who only occasionally dip their toes into the horror genre.

Excision is no pure traditional horror number, but really comes into its own when it comes to the impressively staged dream sequences.

The film had its premiere at Sundance – where some at a press and industry screening walked out following one particularly gruesome sequence – and recently screened at the Fantasia International Film Festival in Montreal, where McCord received a Special Mention for her impressive performance.

McCord stars as 18 year-old Pauline, a high school senior outcast blessed with acne, unfortunate posture, and bushy eyebrows and who dreams of losing her virginity while also fantasising about becoming a surgeon…her dream sequences tend to involve a more elegant and beautiful version of herself engaging in some bizarre surgical procedures.

She is given grief at school by her maths teacher (Malcolm McDowell), while her home life is equally unpleasant. Mother Phylis (Traci Lords) is a religious disciplinarian and forces Pauline to attend regular therapy sessions with Rev Green (wonderfully played by cult filmmaker John Waters).

The performances are all terrific, with McCord excellent as the troubled and twisted Pauline, asked to really act in contrast to her other recent performances and Traci Lords now an easy fit into loopy mother roles.

Excision is no pure traditional horror number, but really comes into its own when it comes to the impressively staged dream sequences as Pauline imagines a series of terrifying bloody and twisted surgical moments. Whether it will feature much in terms of formal theatrical releases – beyond the genre festival circuit – is debatable, with home entertainment a more likely route, with Anchor Bay set to release on DVD in the US in October.