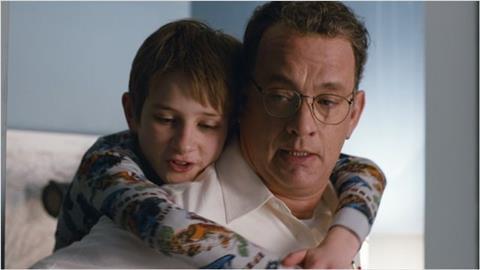 Stephen Daldry has previously made three feature films and been Oscar-nominated as Best Director for each of them, so Extremely Loud & Incredibly Close demands to be taken seriously, and certainly will be by many awards pundits and critics. An adaptation of Jonathan Safran Foer’s 2005 novel, the movie purports to filter anguish and the experience of loss through the prism of a quirky young boy. In reality, it’s a preening and somewhat contrived film, a tapestral effort of skilled tradecraft brought to bear upon a self-serious framework of overt manipulations.

Below-the-line, the film often bears the hallmarks of a classy, well-ordered production.

Straight out of the gate, Extremely Loud, which opens in limited release on Christmas Day and wide on January 20, 2012, should find its commercial prospects bolstered by the participation of Tom Hanks and Sandra Bullock as the adolescent parents’ subjects, in what amount to supporting roles. If families and general audiences looking for a dewy big screen drama have but one holiday choice, though, they might be more apt to select one of the movies with animals (War Horse, We Bought a Zoo) rather than one focusing on the emotional aftermath of the September 11 terrorist attacks.

The film unfolds in 2002, in New York City. On what he habitually refers to as “the worst day,” Oskar Schell (Thomas Horn) lost his doting father Thomas (Hanks), who was also his best friend, in the collapse of the World Trade Center towers. A wildly bright, anxiety-stricken nine-year-old quite possibly stricken with autism or Asperger’s Syndrome (“Tests weren’t definitive,” he says), Oskar narrates his heartache and pain in unswerving and almost omniscient fashion.

With his mother Linda (Bullock), with whom he was already less close, reduced to an uncommunicative wreck, Oskar lives in private with his grief, having secreted away the answering machine tape from that fateful morning which contains a half dozen increasingly frantic messages from his father. After discovering a mysterious key in his dad’s closet in an envelope marked “Black,” Oskar sets out on a quixotic journey through the five boroughs trying to ascertain the lock it fits.

It’s partly emotionally utilitarian — a way of extending and keeping alive and vital his connection to his dad — but Oskar also figures that by contacting every person with said surname he can unlock the last of his father’s many elaborately constructed “special expeditions,” intellectual games in which they used to participate together.

One of the first people Oskar meets is Abby Black (Viola Davis), who is touched by his mission. Methodically, Oskar starts to make his way down his long list, and eventually takes on a helper in the form of a mysterious, mute boarder (a wonderful Max Von Sydow) from the across-the-street apartment of his grandmother (Zoe Caldwell).

Within the parameters of this narrative, one can make out the faint outlines for a rich and interesting if perhaps not exactly graceful exploration of human connection, and how despair impacts us all differently. But various baroque touches (a tambourine Oskar uses to soothe himself) don’t particularly translate well to screen, and the mystery at the core of Daldry’s film seems incredibly antiseptic.

Screenwriter Eric Roth jettisons the ethnic specificity and pares down the source material to focus almost exclusively on Oskar and his quest, but the result takes on the qualities of an overly mannered exercise in stimulative poignancy. Extremely Loud & Incredibly Close exists less to tell a story than to make an audience feel, and boy does it know it.

With effective but infrequent flashbacks showcasing Thomas and Oskar’s connection and only a mute to provide counterbalance to Oskar’s chatterbox soul, the movie’s stilted, formal, contraction-free narration becomes overwhelming and tedious. That no one reacts with curiosity or exasperation at Oskar’s behavior marks the film a cutesy fairytale of sorts.

Though it’s wrapped in a gauzy cloak of naturalism, Daldry cannot muster any of the direct, gut-punch emotionalism found in something like Jacques Doillon’s Ponette, one of the most devastating movies ever made about adolescent grief, and parental disconnection from it. Instead, Daldry gooses the audience with a couple slices of experiential mania, which feel retro-engineered to fit some whimsical idea of a preternaturally precocious special needs kid.

Others may pull punches owing to the movie’s literary pedigree, but it’s hard to locate much honest emotional connection absent the story’s September 11 trappings, and there are no grander learned truths here that merit the sort of repeat viewings that would elevate this to the canon of the year’s worthiest dramas.

An acting neophyte with no formal training, Horn at times recalls a young Elijah Wood. Verbally, he performs a feat akin to Anna Kendrick’s work as an ambitious high school debater in 2007’s Rocket Science, rifling through information in a style necessarily designed to engulf.

Below-the-line, the film often bears the hallmarks of a classy, well-ordered production. Chris Menges’ cinematography is radiant and evocative, while K.K. Barrett’s production design and Claire Simpson’s nimble editing showcase the filmmakers’ ability to communicate in different settings and modes. Additionally, the score from Alexandre Desplat — a late addition, after other music was scrapped — delights in unexpectedly allusive ways. Unfortunately, all this is in the service of a very affected vehicle.

Screenplay: Eric Roth, based on the novel by Jonathan Safran Foer