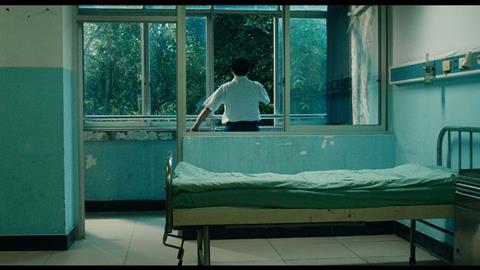 An air of sad acceptance and disappointment hovers over this impressionistic portrait of a modern-day China megalopolis and a of working class family falling apart in its midst. The poetical slow pace, the dark blue and grey hues of the evening, sky scrapers looming over desert shores of the Yangtze, the walks through the city’s streets and over its bridges, with all of these sights softening the hard edges of reality, but at the same time adding to the melancholy it inspires.

It’s all a sorrowful tale of woe, offering little hope, told in a disjointed manner, the story breaking every once in a while through the moody portrait of the city and then retreating again, indulging as it does so, in plenty of atmosphere.

Though Wang Chao wrote the script shortly after his debut picture (2003’s Anyang Orphan), he claims that nothing has changed in the past decade and the harsh realities of the Chinese working class have remained pretty much the same. Here, however, instead of showing them on a realistic level, he has chosen to adorn it with reflections on themes such as life and death, shifts of culture, fractured families and generation gaps.

A factory worker (Zhang Xu) is suddenly taken ill. At the hospital he is diagnosed with leukemia in an advanced stage. He is in immediate need of treatments and blood transfusions, but his wife (Su Su) is told that the factory employing him had taken care of the expenses up to a certain point but cannot go on doing it for ever, and now the family has to assume the responsibility for half of the cost.

She approaches friends and relatives but to no avail, with one exception, her mother who sneaks out of the house to give her some cash, unbeknownst of her father.

The couple has two children, an older daughter from a previous marriage (Jian Renzi) and a younger boy Lin (Hu Ruijie) still attending school. The girl leads the typical life of youth today, discotheques, free love and no worries, but once she realizes the family’s dire need of money, goes out to work as a bar girl. The boy skips school, joins a trucker and his assistant to gain some more cash, befriends a girl his own age (Wang Xiaomo) living on a river boat with a man who plays the trumpet (Zhang Lu), who finally turns out, bought her from her biological father who needed the money to take care of his two other sons.

It’s all a sorrowful tale of woe, offering little hope, told in a disjointed manner, the story breaking every once in a while through the moody portrait of the city and then retreating again, indulging as it does so, in plenty of atmosphere. Significant details are thrown in along the way, whether they hint at Chinese culture fading out to be replaced by Western traditions.