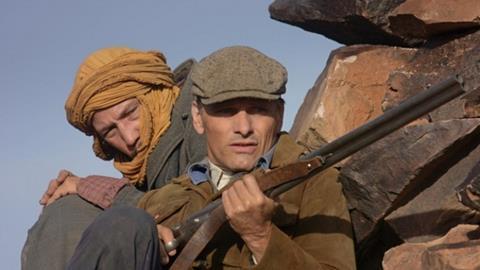 In all fairness, Albert Camus’ short story L’hote (The Guest) may be too spare and lean to fill a full-length feature film. But also in all fairness, it captures its issues in a far more concise and eloquent manner then David Oelhoffen’s film, which uses Camus’ original as a premise to embroider upon. The result, Far From Men (Loin des hommes), is a large-scale, often melodramatic, Western-type morality tale with ethnic and political overtones, using the spectacular landscape of Morocco’s mountains for a backdrop.

Choosing Mortensen for the lead, as strange as it may seem, will provide undoubtedly the clout for international market. He delivers a reliable performance.

The story of the Algerian-born French philosopher Camus takes place in Algiers, 1954. Officially, the uprising against the French occupation had not yet been officially declared, but signs of it were evident all over the place. A French teacher, in a remote school, isolated in the mountains, is instructed to deliver an Arab prisoner, accused of having killed one of his cousins, into the hands of justice in the next town.

The Arab had been brought to the school by an old gendarme who has to return to his post because of the troubles brewing everywhere. The teacher tells the sergeant he has no intention of following the instructions and the next morning, he takes the prisoner to the nearest crossroads, puts some food a 1000 francs in his hands and tells him that one road leads to the nearest town and prison, the other road will take him to the desert to join the nomad tribes there. He’s free to decide which way to go. As he goes back to school, he sees the Arab walking slowly in the direction of the prison. That’s all. But the conflicts emerging from this encounter, most of the still unresolved today, are already in place.

Oelhoffen obviously wanted to take the story several steps farther and probably bring it up to date with all the events that Camus had already sensed at the time but were to erupt soon after. Camus’ schematic plot becomes just the opening gambit. Instead of taking his prisoner to a crossroads, next day, the teacher, Daru (Viggo Mortensen) and the Arab Mohamed (Reda Kateb) set out on a long journey together. On the way they are threatened by French settlers, by Mohamed’s fellow villagers seeking vengeance, by Algerian rebels hiding in the mountains and by the French army who has been ordered to exterminate all resistance and take no prisoners.

They survive all these adventures, in the course of which the essence of the Algerian revolution is conveyed in what appears to be a politically correct manner.

In the process, the unbridgeable distance between two different worlds and cultures, evident in Camus story, is practically lost, and as the plot proceeds, its similarities to an Anthony Mann western (an inspiration quoted by Oelhoffen himself) are painfully obvious, with Mortensen playing a peace-loving James Stewart role and Reda Kateb taking on the noble savage part, being the man who sacrifices himself for his family, and would rather be executed by the French than cause a blood feud that will not end for generations.

The script does make efforts to keep the plot together and explain certain incongruities (Daru is not French but the son of Andalusian parents, therefore his less than perfect accent and he is a reserve major in the French army, to justify his dexterity with firearms), it dutifully points out that most of the rebels against the French occupation were once soldiers of the Tricolor army during WWII, and also suggests that some of the French officers serving in Algiers were conscious of the war crimes they were committing but hid behind the justification that they were obeying orders.

Many other questions, however, are left open. For instance, how is Daru to survive, whether he does deliver his prisoner to justice or not, once he goes back to his school? In Camus’ story, on returning to his class, he finds, clumsily written on the blackboard: “You handed over our brother, you will pay for it.” A reminder that staying aloof is not an option here, which sounds far more relevant to the state of things in the world today than Oelhoffen’s rather optimistic, sentimental ending.

Choosing Mortensen for the lead, as strange as it may seem, will provide undoubtedly the clout for international market. He delivers a reliable performance, as long as he is not pressed into temperamental explosions, which lead even his partner to wonder aloud if this is the way a teacher acts in class as well. In contrast, Reda Kateb downplays his part to the point of defeatism, not exactly the type that will draw unanimous approval of ethnic groups. Tighter editing would have helped Oelhoffen’s staid direction, which is particularly noticeable in the action scenes and his excessive use of Western clichés. Luckily, there is always the landscape, which remains one of the film’s most impressive assets.