Andrew Lau and Andrew Loo, Revenge of the Green Dragons

The co-directors sat down with Jean Noh ahead of the world premiere at Toronto of the gangster drama exec produced by Martin Scorsese. 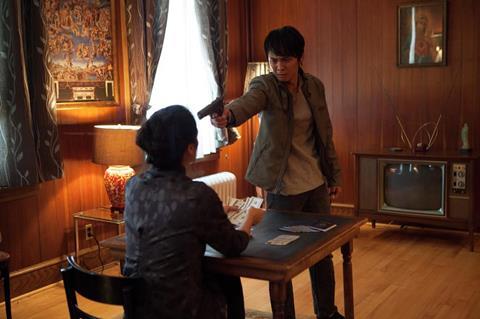 Executive produced by Martin Scorsese, Revenge Of The Green Dragons (ROTGD) was co-directed by Hong Kong-based filmmakers Andrew Lau (Infernal Affairs, The Flock) and Andrew Loo (It Had To Be You, Snow Flower And The Secret Fan).

Based on the New Yorker article by Frederic Dannen, the film stars Justin Chon from the Twilight Saga films and YouTube talent Kevin Wu (a.k.a. KevJumba) as best friends who grow up in the brutal Chinatown underworld of 1980s New York. The cast also includes Harry Shum Jr. as a young gangster boss, Ray Liotta as an FBI agent and Shuya Chang as a love interest.

The film mixes Hong Kong action cinema with New York grit and the realities of a twisted American Dream where immigrants exploit, kill and rob from one another much in the vein of the Black Hand or Irish Mob of the city’s earlier years.

How did this project come together?

Andrew Loo: I got an urgent call from the producers at 7th Floor in New York - they’d optioned the New Yorker article in 2008. I worked with Michael Di Jiacomo to write the script and then Martin Scorsese came in.

Lau: We knew each other because Martin remade Infernal Affairs into The Departed.

Loo: It took two years to write the script, two years to finance after that, and two to make the film. The only things we had going for us when financing were Martin Scorsese, Andrew Lau, and the script. UFO Films in Hong Kong financed a piece, and IM Global financed the rest.

The article the film is based on is a long read with many players spanning a decade. It could have been a mini-series. How did you go about adapting it?

Loo: The challenge was to whittle it down and figure out who you were going to follow in the story and could root for. There was some consolidation and omission to make a 90-minute film. We wanted to be truthful to the story, but we were not making a documentary.

We held open casting calls because we were really trying to find people true to the story, and specific to the Asian, Chinese immigrant story. We had thousands of people come in and some of them only spoke Chinese. One of the questions we asked was, “If you were to know then what you know now, would you still have come here?” And a staggering number, almost 90% said no. You got that sense of what those people feel.

Lau: We felt most in particular in the film that these were people that came to America for the dream but they’re stuck in Chinatown. This is sad to see even today, but in the 1980s they were even poorer and worse off.

What attracted you to the project in the first place?

Lau: I’ve made a lot of gangster films, but the immigration story is what makes this one different and why I wanted to do it. That’s also why we put a lot of June 4, 1989 [Tiananmen Square footage] things in the film, too.

Loo: There was a lot of fascinating stuff in the research data referenced in the montage [at the beginning of the film]. In the 1980s, all these illegal immigrants came over from China. If you could prove to anyone in China that you had a problem with the one-child policy, you could leave. The streets were overflowing with immigrants. They were in hock from the start, just to get over to America, but desperate times call for desperate measures.

Veteran Asian directors often find it challenging to deal with Hollywood studios on set and for final cut. What was it like for you?

Lau: In Hong Kong, the director is king. So it’s different from the States, but on this film, although we had so many producers, we didn’t have any others on set besides me and Loo.

Loo: So it was actually very efficient. Anything we wanted to do or change, we could. We didn’t have final cut, we’re inclusive, but IM Global also wanted to make the best possible film and trusted us as producers as well. Even in China, you can count on us not to go over budget, and to stay on schedule.

What was the production like, shooting in New York with local crew?

Lau: We wanted to bring the Hong Kong shooting style to New York. Of course I know the American style but this time, because the budget was so tight, and the Hong Kong style is so efficient, I just said, “Okay, everybody concentrate. It’s better if we decide everything beforehand.” And it was all shot handheld to be more realistic.

Loo: We knew we couldn’t get 30-year union guys so we interviewed and found very special folks who were very creative and passionate about making this film.

Lau: We were able to do that because we did a lot of preparation going in. No waiting for the lights to be set up or anything like that.

Loo: For something like this, the actors also have to be good, they have to come prepared. Everyone doing their part and not needing 20 takes to get it right.