How do you create a national film festival in a physically divided country that is stifled by lack of financing? Screen visits Palestine Cinema Days. 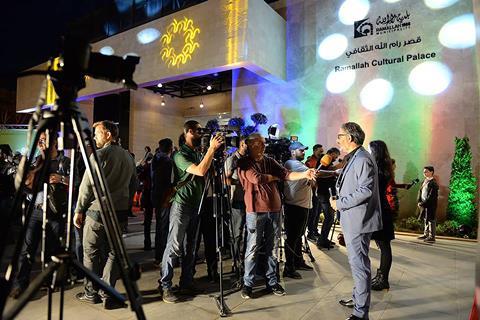 The fifth edition of Palestine Cinema Days — Palestine’s biggest film festival — unfolded in October with an expanded 60-title screening programme, travelling the West Bank cities of Ramallah, Bethlehem and Nablus as well as Jerusalem and the conflict-battered territory of Gaza.

The event was launched by Ramallah-based body Filmlab Palestine in 2014 to encourage young Palestinians to tell their stories through film, build production infrastructure and foster a cinema culture. “Palestinians mainly access cinema through satellite TV channels, which tend to show commercial Hollywood films,” explains Hanna Atallah, artistic director of Filmlab Palestine. “In the beginning, there were a handful of guests, mainly our friends. We said, ‘Just come and then spread the word.’”

This year’s edition featured the second industry-focused Palestine Film Meetings (PFM), overseen by filmmaker Muayad Alayan, whose credits include award-winning drama The Reports On Sarah And Saleem. It showcased local feature projects, seven of which had participated in a European Audiovisual Entrepreneurs (EAVE) On Demand workshop organised in Ramallah last March.

It also featured a packed panel and talks programme, including a lively discussion asking whether Palestine could follow the model of Malta and transform itself into an international filming location — a session led by Maltese producer Joyce Grech and Laura Hawa, the local line producer on Palestinian titles Wajib by Annemarie Jacir and The Idol by Hany Abu-Assad.

Buzzy new feature projects presented during the PFM included Said Zagha’s thriller The Girl, exploring divisions within Palestinian society through the tale of a security officer whose daughter is kidnapped by militants, and Laila Abbas’s comedy-drama Barzakh, about two sisters who hide the fact their father has died in order to circumvent sexist inheritance laws, which won three prizes at the CineGouna project platform at Egypt’s El Gouna Film Festival in September.

There were also a number of strong documentary projects including Sawsan Qaoud’s The Children Of Smuggled Sperm, exploring the conception of some 60 children by artificial insemination using the smuggled sperm of Palestinian prisoners in Israeli jails, and Mahasen Nasser-Eldin’s We Carve Words In The Earth, researching the forgotten history of Palestinian women.

Lina Bokhary, head of cinema at the Palestinian Ministry of Culture, believes a new generation of filmmakers is emerging in Palestine but the absence of sustained state investment and infrastructure means getting features off the ground remains an uphill battle.

“The government is under pressure financially on so many fronts. Culture, and within that film, is not high on its list of priorities,” says Bokhary, who said her annual state budget is just $100,000.

Palestine Cinema Days took place towards the end of a testing year for Palestine. As Israel celebrates the 70th anniversary of its creation in May 1948, Palestinians have been commemorating what they call the ‘nakba’, meaning ‘catastrophe’, which saw 700,000 people driven from their homes.

The decision to relocate the US embassy to the contested city of Jerusalem from Tel Aviv in May and the cancellation of the annual $300m contribution to the United Nations Relief and Works Agency for Palestinian Refugees in the Near East also heightened the generally aggrieved mood.

The screening selection reflected this, combining international festival hits exploring themes of human suffering and resilience with a showcase of local short fiction and documentary works, competing in the Sunbird award competition.

Animated feature The Tower, about life through the eyes of an 11-year-old girl in the Palestinian Burj el-Barajneh refugee camp in Lebanon, kicked off the event with a gala screening at Ramallah Cultural Palace, with its Norwegian director Mats Grorud and producer Frode Sobstad in attendance.

Further international titles included The State Against Mandela, reconstructing the 1963-64 trial of Nelson Mandela, AB Shawky’s Egyptian drama Yomeddine, about a leprosy survivor and orphan who set off on a journey of discovery, and Iraqi suicide attack drama The Journey.

Restriction of movement in the occupied West Bank — due to permanent and flying Israeli checkpoints, the separation wall and tight security around illegal Israeli settlements — was a theme running through many of the local works. Atallah noted it was one of the main reasons why the festival takes place over five locations. “There is a lack of mobility,” he says. “It can be difficult to move from city to city. Holding it in different locations makes more sense.”

Industry guests experienced this first hand when it took 90 minutes to travel by coach from Ramallah to Bethlehem – two cities which are 22km apart as the crow flies - to participate in a day of professional events at the newly opened Dar Yusuf Nasri Jacir for Art and Research cultural centre, created by Wajib director Jacir and her artist sister Emily Jacir, in the home of their late grandparents. The day concluded with a walk along the Israeli separation wall before taking the coach back, with driver navigating impromptu Friday night roadblocks and checkpoints along the winding, mountainous route back to the festival’s main hub of Ramallah.

The new Dar Yusuf Nasri Jacir for Art and Research is a passion project for director Annemarie Jacir and her artist sister Emily Jacir, breathing fresh life into the traditional stone Arab house that was once home to their late grandparents.

Constructed in 1890, on the historic road connecting the West Bank city of Hebron to Jerusalem, it now lies just 200 metres from a particularly sensitive section of the Israeli Separation Wall built around Jewish holy site of Rachel’s Tomb on the edge of Bethlehem. The city’s Aida, Dheisheh and Azza refugee camps are also in close proximity.

In recent years, the area around the house that has become a flashpoint for fierce clashes between Israeli troops and Palestinian but this has not the deterred the Jacir sisters, who are descendants of a wealthy Bethlehem merchant family which lost its fortune in the 1930s, from pushing on with their plans to restore the building and transform it into a vibrant art and research centre, with local and international connections.

Its restoration is very much a work-in-progress, but upcoming activities include a vegetable garden project aimed at children living in Aida refugee camp, a writing workshop by filmmaker and artist Duncan Campbell, a residency by Palestinian artist Mohamed Saleh and an artistic landscape project by artist Vivien Sansour.

“We will be hosting more film screenings this year and a number of masterclasses by producers, critics, cinematographers and directors,” says Annemarie Jacir.

The sisters are also keen to digitise archive material they have inherited from their great-grandfather and grandfather and also host researchers and academics in residence.

“They kept everything, from the time of the Ottoman occupation of Palestine to the British occupation through today’s Israeli occupation. It’s an incredible archive and we’re digitising it for researchers and academics to use,” says Jacir.